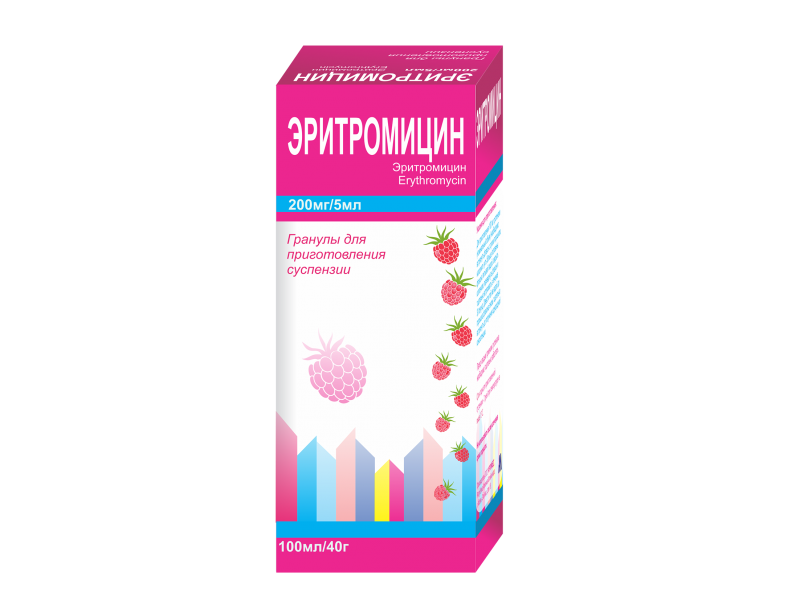 ATC subcategoryMacrolides (for systemic use)

Erythromycin is a macrolide antibacterial with a broad and essentially bacteriostatic action against many Gram-positive and to a lesser extent some Gram-negative bacteria, as well as other organisms including some Mycoplasma spp., Chlamydiaceae, Rickettsia spp., and spirochaetes.

Mechanism of action. Erythromycin binds reversibly to the 50S subunit of the ribosome, resulting in blockage of the transpeptidation or translocation reactions, inhibition of protein synthesis, and hence inhibition of cell growth. Its action is predominantly bacteriostatic, but high concentrations are slowly bactericidal against the more sensitive strains. Because macrolides penetrate readily into white blood cells and macrophages there has been some interest in their potential synergy with host defence mechanisms in vivo. The actions of erythromycin are increased at moderately alkaline pH (up to about 8.5), particularly in Gram-negative species, probably because of the improved cellular penetration of the nonionised form of the drug.

Gram-positive cocci, particularly streptococci such as Streptococcus pneumoniae and Str. pyogenes are sensitive. Most strains of Staphylococcus aureus remain susceptible, although resistance can emerge rapidly, and some enterococcal strains are also susceptible.

Other Gram-negative organisms vary in their susceptibility, but Bordetella spp., some Brucella strains, Flavobacterium, and Legionella spp. are usually susceptible. Haemophilus ducreyi is reportedly susceptible, but H. influenzae is somewhat less so. The Enterobacteriaceae are usually resistant, although some strains may respond at alkaline pH. Helicobacter pylori and most strains of Campylobacter jejuni are sensitive (about 10% of the latter are reported to be resistant).

Among the Gram-negative anaerobes most strains of Bacteroides fragilis and many Fusobacterium strains are resistant.

Other organisms usually sensitive to erythromycin include Actinomyces, Chlamydiaceae, rickettsias, spirochaetes such as Treponema pallidum and Borrelia burgdorferi, some mycoplasmas (notably Mycoplasma pneumoniae), and some of the opportunistic mycobacteria: Mycobacterium scrofulaceum and M. kansasii are usually susceptible, but M. intracellulare is often resistant and M. fortuitum usually so.

Fungi, yeasts, and viruses are not susceptible to erythromycin.

Activity with other antimicrobials. As with other bacteriostatic antimicrobials, the possibility of an antagonistic effect if erythromycin is given with a bactericide exists, and some antagonism has been shown in vitro between erythromycin and various penicillins and cephalosporins or gentamicin. However, in practice the results of such concurrent use are complex, and depend on the organism; in some cases synergy has been seen. Because of the adjacency of their binding sites on the ribosome, erythromycin may competitively inhibit the effects of chloramphenicol or lincosamides such as clindamycin. A synergistic effect has been seen when erythromycin was combined with a sulfonamide, notably against Haemophilus influenzae. Erythromycin has also been reported to enhance the antiplasmodial actions of chloroquine.

Resistance. Several mechanisms of acquired resistance to erythromycin have been reported of which the most common is a plasmid-mediated ability to methylate ribosomal RNA, resulting in decreased binding of the antimicrobial drug. This can result in cross-resistance between erythromycin, other macrolides, lincosamides, and streptogramin B, because they share a common binding site on the ribosome and this pattern of resistance is referred to as the MLSB phenotype. It is seen in staphylococci, and to a somewhat lesser extent in streptococci, as well as in a variety of other species including Bacteroides fragilis, Clostridium perfringens, Corynebacterium diphtheriae, Listeria, and Legionella spp.

Decreased binding of antimicrobial to the ribosome may also occur as a result of a chromosomal mutation, resulting in an alteration of the ribosomal proteins in the 50S subunit, which conveys one-step high-level erythromycin resistance. This form of resistance has been demonstrated in Escherichia coli and some strains of Str. pyogenes, and probably occurs in Staphylococcus aureus.

Other forms of erythromycin resistance may be due to the production of a plasmid-determined erythromycin esterase which can inactivate the drug, or to decreased drug penetration. The latter may be partly responsible for the intrinsic resistance of Gram-negative bacteria like the Enterobacteriaceae, but has also been shown to be acquired as a plasmid-mediated determinant in some organisms; production of a protein which increases drug efflux from the cell is thought to explain the MS form of resistance, in which organisms are resistant to 14-carbon ring macrolides and streptogramins, but retain sensitivity to 16-carbon ring macrolides and lincosamides.

Erythromycin is excreted in high concentrations in the bile and 2 to 5% of an oral dose is excreted unchanged in the urine. Erythromycin is partly metabolized by cytochrome P-450 (CYP) isoenzyme 3A4 in the liver by N-demethylation to inactive, unidentified metabolites.

The half-life of erythromycin is usually reported to be about 1.5 to 2.5 hours, although this may be slightly longer in patients with renal impairment. Only small amounts of erythromycin are removed by hemodialysis.

Uses
Erythromycin is a macrolide antibacterial with a wide spectrum of activity, that has been used in the treatment of a wide variety of infections caused by susceptible organisms.

Its uses have included bronchitis, severe campylobacter enteritis, chancroid, diphtheria, legionnaires’ disease and other Legionella infections, neonatal conjunctivitis, pertussis, pneumonia (mycoplasmal and other atypical pneumonias as well as streptococcal), sinusitis, and trench fever, and, combined with neomycin, for the prophylaxis of surgical infection in patients undergoing bowel surgery.

Erythromycin is used as an alternative to penicillin in penicillin-allergic patients with various conditions including actinomycosis, leptospirosis, listeriosis, mouth infections, otitis media (usually with a sulfonamide such as sulfafurazole), pelvic inflammatory disease caused by Neisseria gonorrhoeae, pharyngitis, the prevention of perinatal streptococcal infections, rheumatic fever, and infections in splenectomised patients, and staphylococcal and streptococcal skin infections. It has also been used in the treatment of penicillin-allergic patients with syphilis, but there are doubts about its efficacy. In penicillin-allergic patients in the early stages of Lyme disease, erythromycin may be used as an alternative to a tetracycline; this use is generally restricted to pregnant women and young children, since it is less effective than other drugs. It is also used as an alternative to the tetracyclines in patients with Chlamydia or Chlamydophila infections (such as epididymitis, lymphogranuloma venereum, nongonococcal urethritis, pneumonia, psittacosis, and trachoma), in Q fever, and in spotted fevers. Oral erythromycin may be used as an alternative to a tetracycline in moderate acne.

Dosage and administration
Erythromycin is for oral use. Is being set individually depending on the location and severity of infection, the sensitivity of the pathogen.

Preparation for children with infectious-inflammatory diseases of mild to moderate severity is administered 30-50 mg/kg, divided into equal doses, every 8 hours. Dose doubled in severe infections.

For the prevention of streptococcal infections in patients with evidence of rheumatic fever or heart disease, who are unable to take penicillin or sulfonamides, a dose of 250 mg every 12 hours. Duration of therapy – not less than 10 days.

For the treatment of urethritis caused by C. trachomatis or U. urealyticum: 500 mg every 12 hours during 14 days.

Тhe dosage should be reduced for the patients with renal insufficiency.

Preparation of a suspensions

Contraindications
Precautions
Erythromycin is excreted principally by the liver, so caution should be exercised in administering the antibiotic to patients with impaired hepatic function or concomitantly receiving potentially hepatotoxic agents. Hepatic dysfunction including increased liver enzymes and/or cholestatic hepatitis, with or without jaundice, has been infrequently reported with erythromycin.

There have been reports suggesting erythromycin does not reach the foetus in adequate concentrations to prevent congenital syphilis. Infants born to women treated during pregnancy with oral erythromycin for early syphilis should be treated with an appropriate penicillin regimen.

There have been reports that erythromycin may aggravate the weakness of patients with myasthenia gravis.

Erythromycin interferes with the fluorometric determination of urinary catecholamines.

Rhabdomyolysis with or without renal impairment has been reported in seriously ill patients receiving erythromycin concomitantly with statins.

There have been reports of infantile hypertrophic pyloric stenosis (IHPS) occurring in infants following erythromycin therapy. In one cohort of 157 newborns who were given erythromycin for pertussis prophylaxis, seven neonates (5%) developed symptoms of non-bilious vomiting or irritability with feeding and were subsequently diagnosed as having IHPS requiring surgical pyloromyotomy. Since erythromycin may be used in the treatment of conditions in infants which are associated with significant mortality or morbidity (such as pertussis or chlamydia), the benefit of erythromycin therapy needs to be weighed against the potential risk of developing IHPS. Parents should be informed to contact their physician if vomiting or irritability with feeding occurs.

Each 5 ml of suspension contains 1153 mg of sucrose and 3.25 mg of sodium saccharin, which will necessarily must be considered to patients with diabetes mellitus.

Patients with rare hereditary problems of fructose intolerance, glucose-galactose malabsorption or sucrase-isomaltase insufficiency should not take this medicine.

Sodium benzoate (E211) – may increase the risk of jaundice in newborn babies.

Because erythromycin is distributed into milk, the drug should be used with caution in nursing women.

Pregnancy Category B: There are no adequate and well-controlled studies in pregnant women. This drug should be used during pregnancy only if clearly needed.

Symptoms: nausea, vomiting, diarrhea and discomfort in the stomach, loss of hearing, ringing in the ears and dizziness.

Drugs that induce CYP3A4 (such as rifampicin, phenytoin, carbamazepine, phenobarbital, St John’s Wort) may induce the metabolism of erythromycin. This may lead to sub-therapeutic levels of erythromycin and a decreased effect. The induction decreases gradually during two weeks after discontinued treatment with CYP3A4 inducers. Erythromycin should not be used during and two weeks after treatment with CYP3A4 inducers.

HMG-CoA Reductase Inhibitors: erythromycin has been reported to increase concentrations of HMG-CoA reductase inhibitors (e.g. lovastatin and simvastatin). Rare reports of rhabdomyolysis have been reported in patients taking these drugs concomitantly.

Contraceptives: some antibiotics may in rare cases decrease the effect of contraceptive pills by interfering with the bacterial hydrolysis of steroid conjugates in the intestine and thereby reabsorption of unconjugated steroid. As a result of this plasma levels of active steroid may decrease.

Anti-bacterial agents: an in vitro antagonism exists between erythromycin and the bactericidal beta-lactam antibiotics (e.g. penicillin, cephalosporin). Erythromycin antagonises the action of clindamycin, lincomycin and chloramphenicol. The same applies for streptomycin, tetracyclines and colistin.

Post-marketing reports indicate that co-administration of erythromycin with ergotamine or dihydroergotamine has been associated with acute ergot toxicity characterised by vasospasm and ischaemia of the central nervous system, extremities and other tissues .

Elevated cisapride levels have been reported in patients receiving erythromycin and cisapride concomitantly. This may result in QTc prolongation and cardiac arrhythmias including ventricular tachycardia, ventricular fibrillation and torsades de pointes. Similar effects have been observed with concomitant administration of pimozide and clarithromycin, another macrolide antibiotic.

There have been post-marketing reports of colchicine toxicity with concomitant use of erythromycin and colchicine.

Cimetidine may inhibit the metabolism of erythromycin which may lead to an increased plasma concentration.

Erythromycin has been reported to decrease the clearance of zopiclone and thus may increase the pharmacodynamic effects of this drug.

40 g of granules is filled into amber glass bottles (inside package).
The bottles are packed and inserted with the leaflet into cardboard boxes (outer package).

3 years. Do not use after the expiration date.
Once reconstituted with water, oral suspension has a shelf-life of 7 days at temperature not higher than 15oC.

Store in a dry place, out of the reach of children, protect from light. At temperature not higher than 150C.