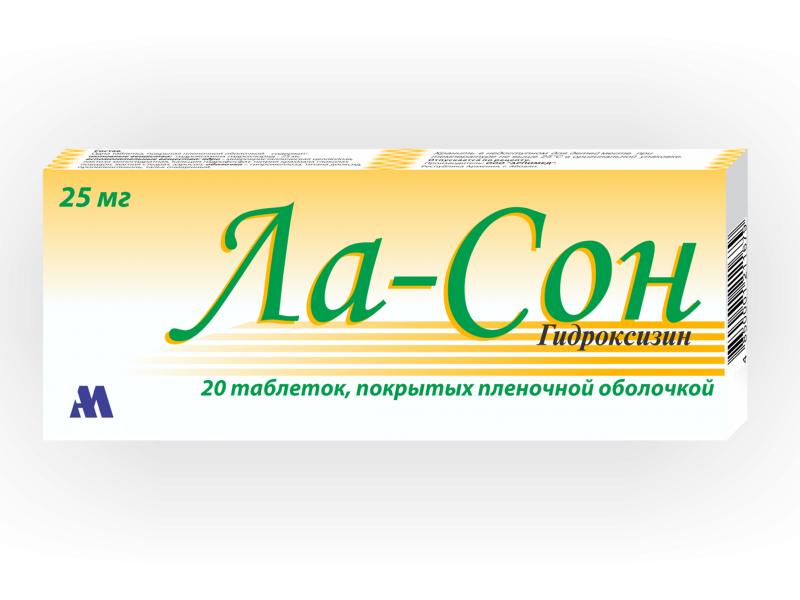 Hydroxyzine is unrelated chemically to benzodiazepines, phenothiazines, reserpine and meprobamate.

Hydroxyzine is a first generation antihistamine, a piperazine derivative, with antimuscarinic and sedative properties.

An onset of sedative action of hydroxyzine is usually noted within 15 to 30 minutes after oral administration. Sedative effects persist for 4-6 hours following administration of a single dose.

Hydroxyzine suppresses the inflammatory response (wheal and flare reaction) and pruritus for up to 4 days after intradermal skin tests with allergens and histamine.

The therapeutic range for plasma hydroxyzine concentrations and the relationship of plasma concentration to clinical response or toxicity have not been established.

Hydroxyzine does not appear to increase gastric secretions or acidity, and usually has mild antisecretory effects.

It induces a calming effect in anxious tense adults. It is not a cortical depressant, but its action may be due to a suppression of activity in certain key regions of the subcortical area of the central nervous system.

Hydroxyzine has been shown clinically to be a rapid-acting anxiolytic with a wide margin of safety. Antihistamine effects have been demonstrated experimentally and confirmed clinically; it is highly effective in alleviating pruritus.

The pharmacokinetics and antipruritic effects of hydroxyzine were studied in 12 children (mean age 6.1 +/- 4.6 years) with severe atopic dermatitis, each given a single 0.7 mg/kg oral dose. Pruritis was significantly suppressed from 1 to 24 hours after the administration of the dose, with greater than 85% suppression from 2 to 12 hours. The potent antipruritic effect persists even when serum concentrations of the drug are low (only 10% of the maximum levels achieved). In children, the biologic effects of hydroxyzine appear to be much more prolonged than would be predicted from the half life values.

Distribution of hydroxyzine into human body tissues and fluids has not been fully characterised. Following administration of hydroxyzine to animals, the drug is widely distributed into most body tissues and fluids with highest concentrations in the liver, lungs, spleen, kidneys, and adipose tissue. The drug is also distributed into bile in animals.
Hydroxyzine crosses the placental barrier which may lead to higher foetal than maternal concentrations.
Serum hydroxyzine concentrations do not necessarily reflect hydroxyzine tissue binding or distribution to skin receptor sites. Suppression of wheals, flares, and associated pruritis has been shown to persist even when serum hydroxyzine concentrations are low.
First-generation H1 antagonists easily cross the blood-brain barrier.
In a study group of healthy adults, the mean apparent volume of distribution has been found to be 16.0 +/- 3.0 L/kg.

Hydroxyzine is metabolised in the liver. Metabolites include cetirizine, which has antihistaminic activity. Cetirizine is formed from hydroxyzine via an oxidative biotransformation step.

An elimination half life of 20.0 +/- 4.1 hours and of 14.0 hours has been reported for hydroxyzine.
Total body clearance in adults is generally in the range of 5 to 12 ml/min/kg.
Hydroxyzine is eliminated by hepatic metabolism in humans. Cetirizine is mainly renally excreted.

The pharmacokinetics of hydroxyzine were studied in nine healthy elderly (mean age 69.5 +/- 3.7 years) subjects who ingested a single dose of hydroxyzine, 0.7 mg/kg (mean dose 49.0 +/- 6.7 mg). The mean serum elimination half life value of hydroxyzine in this elderly group was 29.3 +/-10.1 hours (range 20.2 to 53.3 hours), which was significantly longer than that reported in younger subjects. The mean apparent volume of distribution of hydroxyzine in this elderly group was 22.5 +/- 6.3 L/kg (range 13.4 to 30.7L/kg), which was significantly larger than that reported to be found in young adults. Hydroxyzine has a long mean serum elimination half life value, a large volume of distribution and a prolonged pharmacodynamic effect (suppressive effect on wheal and flare response to histamine) in the elderly. In the elderly a number of age-related biological and physiological changes may have an effect on the pharmacology of hydroxyzine and its metabolite, cetirizine. These changes may impact upon the pharmacologic functions of absorption, distribution, metabolism, excretion, and receptor sensitivity.

Dosage reduction may be appropriate in elderly patients.

The pharmacokinetics and antipruritic effects of hydroxyzine hydrochloride was studied in 12 children aged 1 to 14 years (mean age 6.1 +/- 4.6 years) with severe atopic dermatitis. The children were given a single orally administered dose of 0.7 mg/kg hydroxyzine. The mean peak serum concentration of 47.4 +/- 17.3 ng/ml occurred at a mean time of 2.0 +/- 0.9 hours. Terminal elimination half life was shorter in children than in adults, at a mean of 7.1+/- 2.3 hours. This resulted from a larger clearance rate in children of 32.08 +/- 11.05 ml/min/kg. The elimination half-life values increased with increasing age. Half life values were approximately 4 hours in the 1 year old patients and 11 hours in the 14 year old patient.
Dosage should be adjusted in the paediatric population .

The pharmacokinetics and pharmacodynamics of hydroxyzine were studied in eight patients (mean age 53.4 +/- SD11.2 years) with primary biliary cirrhosis, given a single dose of 0.7 mg/kg (mean dose 43.9 +/- 6.6mg) hydroxyzine. All patients had abnormal liver biochemistry tests, all had biopsies compatible with primary biliary cirrhosis, and seven of eight had positive tests for antimitochondrial antibodies.

Use in the elderly A reduced dose is advised. This is due to a possible increase in the volume of distribution, prolonged action and the possible effect of age-related changes on pharmacologic functions, including hepatic metabolism and renal excretion.

As with all medications, the dosage should be adjusted according to the patient’s response to therapy.

Hepatic impairment The total daily dose should be reduced by 33%. Use in patients with severe liver disease should be avoided .

Renal impairment For patients with moderate or severe renal impairment, it is recommended that the total daily dosage should be reduced by 50% .

The most common adverse effect of the sedating antihistamines is CNS depression. Effects vary from slight drowsiness to deep sleep, and include lassitude, dizziness, and incoordination. Paradoxical stimulation may occasionally occur, especially at high doses and in children and the elderly. If sedative effects occur, they may diminish after a few days of treatment. Other common adverse effects include headache, psychomotor impairment and antimuscarinic effects.

1,2,3 reported usually with doses considerably higher than those recommended. Continuous therapy with over 1g/day has been employed in some patients without these effects having been encountered.
4 dyskinesia may follow termination of prolonged antihistamine therapy.

Children and the elderly are more susceptible to side-effects.

There is no specific antidote. It is doubtful whether haemodialysis or peritoneal dialysis has any value in the treatment of overdosage with La-Son. However, if other agents such as barbiturates have been ingested concomitantly, dialysis may be indicated.

Consider activated charcoal only if the patient presents within 1 hour of ingestion of a potentially toxic amount. Gastric lavage is rarely required; for substances that cannot be removed effectively by other means, it should be considered only if a life-threatening amount has been ingested within the previous hour. It should be carried out only if the airway can be protected adequately. Induction of emesis is not recommended.

General supportive care, including frequent monitoring of the vital signs and close observation of the patient is indicated. Clear airways should be maintained, and there should be adequate ventilation. Assisted ventilation is indicated if hypercapnia is present. Observation for 6 hours after ingestion, without any other specific treatment, will be sufficient for the majority of patients. Monitor BP, pulse and body temperature. In symptomatic patients measure U&Es and creatine kinase. Perform a 12-lead ECG and monitor cardiac rhythm. Patients who have been unconscious may be hypothermic.

Hypotension, though unlikely, may be controlled with intravenous fluids. In adults, if severe hypotension persists, determine the cause and consider treatment with the following; if hypotension is mainly due to decreased systemic vascular resistance, drugs such as noradrenaline or high dose dopamine may be beneficial, if hypotension is due to reduced cardiac output dobutamine, or in severe cases adrenaline may be beneficial. However it should be noted that hydroxyzine has been shown to inhibit and reverse the vasopressor effect of adrenaline.

Analeptic agents should not be used since they may cause seizures.

As in the management of overdosage with any drug, it should be borne in mind that multiple agents may have been taken.

Contraindications
La-Son is contra-indicated in the following:

Contains lactose. Patients with rare hereditary problems of galactose intolerance, the Lapp lactase deficiency or glucose-galactose malabsorption should not take this medicine.

La-Son should be used with caution in patients with impaired renal function. It is uncertain whether the drug may accumulate or have other adverse effects in such patients. La-Son is completely metabolised and one of the metabolites is the active metabolite cetirizine. Cetirizine is renally excreted and clearance is reduced in patients with moderate renal impairment and on dialysis compared to normal volunteers.

In elderly patients, it is recommended to reduce the dose of hydroxyzine due to a possible increase in the volume of distribution, prolonged action, and the possible effect of age-related changes on pharmacologic functions, including hepatic metabolism and renal excretion.

Because of its potential antimuscarinic actions, La-Son should be used with caution in patients suffering from angle-closure glaucoma, urinary retention, prostatic hyperplasia, or pyroduodenal obstruction.

Caution is required in patients suffering the following conditions:

Dosage adjustments may be required if La-Son is used simultaneously with other CNS depressants or with drugs having antimuscarinic properties.
The concomitant use of alcohol and hydroxyzine should be avoided.
Treatment should be stopped for one week before skin testing for allergy is undertaken, and for 96 hours prior to a methocholine test.
Children and the elderly are more susceptible to side-effects.
Patients should be warned of impaired judgement and dexterity.

La-Son should not be used during pregnancy.
Clinical data in humans are inadequate to establish safety in early pregnancy.
The use of sedating antihistamines in the latter part of the third trimester may cause adverse effects in neonates such as irritability, paradoxical excitability, and tremor.
Animal studies have shown reproductive toxicity. Foetal abnormalities have been reported when hydroxyzine was administered, at doses substantially above the human therapeutic dose, to the pregnant mouse, rat and rabbit.
Hydroxyzine crosses the placental barrier which may lead to higher foetal than maternal concentrations.
The following events were observed in a neonate whose mother received high dose (600mg per day) hydroxyzine during pregnancy; hypotonia, movement disorders including extrapyramidal disorders, clonic movements, tachypnea and poor feeding.

Breast-feeding:
It is expected that La-Son may be excreted into breast milk. The effects on the nursing infant are unknown. La-Son should not be given to nursing mothers.

Lа-Son may have the following interactions:

Antimuscarinics: antimuscarinic side effects (both peripheral and central) may be increased if La-Son is given with antimuscarinics such as atropine and some antidepressants (both tricyclics and MAOIs).

Adrenaline: hydroxyzine has been shown to inhibit and reverse the vasopressor effect of adrenaline.

Betahistine: Hydroxyzine may antagonise the effects of betahistine.

CYP2D6 & cytochrome P450: Hydroxyzine is an inhibitor of CYP2D6 and may cause drug-drug interactions with CYP2D6 substrates. Cetirizine does not interact with other drug substances via cytochrome P450.

Ototoxic drugs: it has been suggested that some sedating antihistamines could mask the warning signs of damage caused by ototoxic drugs such as aminoglycoside antibiotics.

2 blister packets with 10 tablets in each and leaflet inserted in the cardboard box.

2 years. Do not use after the expiration date.