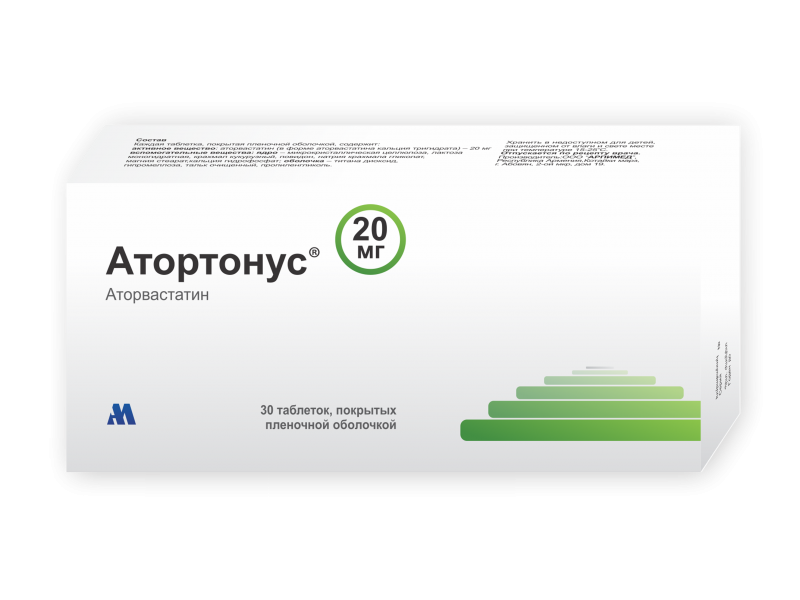 Atorvastatin, a selective, competitive HMG-CoA reductase inhibitor, is used to lower serum total and LDL cholesterol, apoB, and triglyceride levels while increasing HDL cholesterol. High LDL-C, low HDL-C and high TG concentrations in the plasma are associated with increased risk of atherosclerosis and cardiovascular disease. The total cholesterol to HDL-C ratio is a strong predictor of coronary artery disease and high ratios are associated with higher risk of disease. Increased levels of HDL-C are associated with lower cardiovascular risk. By decreasing LDL-C and TG and increasing HDL-C, atorvastatin reduces the risk of cardiovascular morbidity and mortality. Atorvastatin has a unique structure, long half-life, and hepatic selectivity, explaining its greater LDL-lowering potency compared to other HMG-CoA reductase inhibitors.

Metabolism: Atorvastatin is metabolised by cytochrome P450 3A4 to ortho- and parahydroxylated derivatives and various beta-oxidation products. In vitro, inhibition of HMG-CoA reductase by ortho and parahydroxylated metabolites is equivalent to that of atorvastatin. Approximately 70% of circulating inhibitory activity for HMG-CoA reductase is attributed to active metabolites.

Excretion: Atorvastatin and atorvastatin metabolites are substrates of P-glycoprotein (see section 4.5). Atorvastatin is eliminated primarily in bile following hepatic and/or extrahepatic metabolism. However, the drug does not appear to undergo significant enterohepatic recirculation. Mean plasma elimination half-life of atorvastatin in humans is approximately 14 hours. The half-life of inhibitory activity for HMGCoA reductase is approximately 20 to 30 hours due to the contribution of active metabolites.

Geriatric: Plasma concentrations of atorvastatin are higher in healthy elderly subjects than in young adults while the lipid effects were comparable to those seen in younger patient populations.

Paediatric: Pharmacokinetic data in the paediatric population are not available.

Gender: Concentrations of atorvastatin in women differ (approximately 20% higher for Cmax and 10% lower for AUC) from those in men. These differences were of no clinical significance, resulting in no clinically significant differences in lipid effects among men and women.

Renal Insufficiency: Renal disease has no influence on the plasma concentrations or lipid effects of atorvastatin.

Hepatic Insufficiency: Plasma concentrations of atorvastatin are markedly increased (approximately 16-fold in Cmax and 11fold in AUC) in patients with chronic alcoholic liver disease (ChildsPugh B).

Atorvastatin is indicated for reducing the risk of cardiovascular events in diabetic patients with at least 1 additional risk factor, without clinically evident coronary heart disease irrespective of whether cholesterol is raised.

The patient should be placed on a standard cholesterol-lowering diet before receiving Atorvastatin and should continue on this diet during treatment with Atorvastatin. The usual starting dose is 10 mg once a day. Doses should be individualised according to baseline LDLC levels, the goal of therapy, and patient response. Adjustment of dosage should be made at intervals of 4 weeks or more. The maximum dose is 80 mg once a day. For patients taking interacting drugs that increase plasma exposure to atorvastatin, the starting dose should be 10 mg once a day, and a maximum dose of less than 80mg may need to be considered. In some cases a dose reduction, or where not practical, a temporary dose suspension may be considered. Doses above 20mg/day have not been investigated in patients aged

Dosage in Patients With Renal Insufficiency

Dosage in Patients With Hepatic Dysfunction

Specific treatment is not available for Atorvastatin overdosage. Should an overdose occur, the patient should be treated symptomatically and supportive measures instituted, as required. Liver function tests and serum CPK levels should be monitored. Due to extensive drug binding to plasma proteins, haemodialysis is not expected to significantly enhance atorvastatin clearance.

Contraindications
Atorvastatin is contraindicated in patients with hypersensitivity to any component of this medication, active liver disease or unexplained persistent elevations of serum transaminases exceeding 3 times the upper limit of normal, during pregnancy, while breast-feeding, and in women of child-bearing potential not using appropriate contraceptive measures.
Precautions
Liver Effects

Liver function tests should be performed before the initiation of treatment and periodically thereafter. Patients who develop any signs or symptoms suggestive of liver injury should have liver function tests performed. Patients who develop increased transaminase levels should be monitored until the abnormality(ies) resolve. Should an increase in ALT or AST of greater than 3 times the upper limit of normal persist, reduction of dose or withdrawal of Lipitor is recommended. Atorvastatin should be used with caution in patients who consume substantial quantities of alcohol and/or have a history of liver disease.

Treatment with HMG-CoA reductase inhibitors (statins) has been associated with the onset of myalgia, myopathy, and very rarely rhabdomyolysis. Myopathy must be considered in any patient under statin therapy presenting with unexplained muscle symptoms such as pain or tenderness, muscle weakness or muscle cramps. In such cases creatine kinase (CK) levels should be measured

Creatine phosphokinase (CPK) should not be measured following strenuous exercise or in the presence of any plausible alternative cause of CPK increase as this makes value interpretation difficult. If CPK levels are significantly elevated at baseline (>5 times ULN), levels should be remeasured within 5 to 7 days later to confirm the results.

As with other statins atorvastatin should be prescribed with caution in patients with pre-disposing factors for rhabdomyolysis. A creatine phosphokinase (CPK) level should be measured before starting treatment in the following situations:
− Renal impairment
− Hypothyroidism
− Personal or familial history of hereditary muscular disorders
− Previous history of muscular toxicity with a statin or fibrate
− Previous history of liver disease and/or where substantial quantities of alcohol are consumed
− In elderly (age> 70 years), the necessity of such measurement should be considered, according to the presence of other predisposing factors for rhabdomyolysis

In such situations, the risk of treatment should be considered in relation to possible benefit and clinical monitoring is recommended. If CPK levels are significantly elevated (>5 times ULN) at baseline, treatment should not be started.

Whilst on treatment
− If muscular pain, weakness or cramps occur whilst a patient is receiving treatment with a statin, their CPK levels should be measured. If these levels are found to be significantly elevated (> 5 times ULN), treatment should be stopped.
− If muscular symptoms are severe and cause daily discomfort, even if CPK levels are elevated to 5 times ULN, treatment discontinuation should be considered.
− If symptoms resolve and CPK levels return to normal, then re-introduction of atorvastatin or introduction of an alternative statin may be considered at the lowest dose and with close monitoring.
These CPK elevations should be considered when evaluating the possibility of myocardial infarction in the differential diagnosis of chest pain.

As with other drugs in this class, rhabdomyolysis with acute renal failure has been reported. A history of renal impairment may be a risk factor for the development of rhabdomyolysis. Such patients merit closer monitoring for skeletal muscle effects.

In patients aged 52 weeks’ duration and effects on long-term cardiovascular outcomes are unknown.

The effects of atorvastatin in children aged

Risk of dose-related side effects including rhabdomyolysis is increased when atorvastatin is administered concomitantly with certain medications that may increase the plasma concentration of atorvastatin such as: ciclosporin, erythromycin, clarithromycin, itraconazole, ketoconazole, nefazodone, niacin, gemfibrozil, other fibrates or HIV-protease inhibitors. The risk of myopathy may also be increased with the concomitant use of ezetimibe. If possible alternative (non-interacting) therapies should be considered instead of these medications. In cases where co-administration of these medications with atorvastatin is only necessary for a few days, a dose reduction or where not practical, a temporary suspension of treatment with atorvastatin may be considered. If co-administration with interacting drugs is unavoidable, the starting dose of atorvastatin should be 10 mg once a day. In the case of ciclosporin, clarithromycin and itraconazole, a lower maximum dose of atorvastatin should be used. Lipid levels should be monitored to ensure that the lowest dose necessary of atorvastatin is employed.

Patients with rare hereditary problems of galactose intolerance, Lapp lactose deficiency or glucose-galactose malabsorption should not take this medicine.

Temporary suspension of atorvastatin may be appropriate during fusidic acid therapy .

Exceptional cases of interstitial lung disease have been reported with some statins, especially with long term therapy.Presenting features can include dyspnoea, non-productive cough and deterioration in general health (fatigue, weight loss and fever). If it is suspected a patient has developed interstitial lung disease, statin therapy should be discontinued.

Atorvastatin is contraindicated in pregnancy and while breast-feeding. Women of child-bearing potential should use appropriate contraceptive measures. An interval of 1 month should be allowed from stopping Atorvastatin treatment to conception in the event of planning a pregnancy. In animal studies atorvastatin had no effect on fertility and was not teratogenic, however, at maternally toxic doses foetal toxicity was observed in rats and rabbits. The development of the rat offspring was delayed and post-natal survival reduced during exposure of the dams to atorvastatin equivalent to 6 and 21 times that expected in man, respectively. In rats, plasma concentrations of atorvastatin are similar to those in milk. It is not known whether this drug or its metabolites is excreted in human milk.

The risk of myopathy during treatment with HMG-CoA reductase inhibitors is increased with concurrent administration of ciclosporin, fibrates, macrolide antibiotics including erythromycin, azole antifungals, HIV-protease inhibitors or niacin and on rare occasions has resulted in rhabdomyolysis with renal dysfunction secondary to myoglobinuria. In cases where co-administration of these medications with atorvastatin is necessary, the benefit and the risk of concurrent treatment should be carefully considered. When patients are receiving drugs that increase the plasma concentration of atorvastatin, the starting dose of atorvastatin should be 10 mg once a day. In the case of ciclosporin, clarithromycin and itraconazole, a lower maximum dose of atorvastatin should be used.Lipid levels should be monitored to ensure that the lowest dose necessary of atorvastatin is used.

Erythromycin: Erythromycin is a known inhibitor of cytochrome P450 3A4. Co-administration of atorvastatin 10 mg OD and erythromycin (500 mg QID) resulted in a 33% increase in exposure to total atorvastatin activity.

Diltiazem hydrochloride: Co-administration of atorvastatin 40 mg with diltiazem 240 mg resulted in a 51% increase in atorvastatin AUC. After initiation of diltiazem or following dosage adjustment, lipid levels should be monitored to ensure that the lowest dose necessary of atorvastatin is used.

Phenazone: Co-administration of multiple doses of atorvastatin and phenazone showed little or no detectable effect in the clearance of phenazone.

Cimetidine: An interaction study with cimetidine and atorvastatin was conducted, and no interaction was seen.

Amlodipine: In a drug-drug interaction study in healthy subjects, co-administration of atorvastatin 80 mg and amlodipine 10 mg resulted in an 18% increase in atorvastatin AUC.

Fusidic acid: Although interaction studies with atorvastatin and fusidic acid have not been conducted, severe muscle problems such as rhabdomyolysis have been reported in post-marketing experience with this combination. Patients should be closely monitored and temporary suspension of atorvastatin treatment may be appropriate.

Other: In clinical studies in which atorvastatin was administered with antihypertensives or hypoglycaemic agents no clinically significant interactions were seen.

3 blister packets with 10 tablets in each and leaflet inserted in the cardboard box.