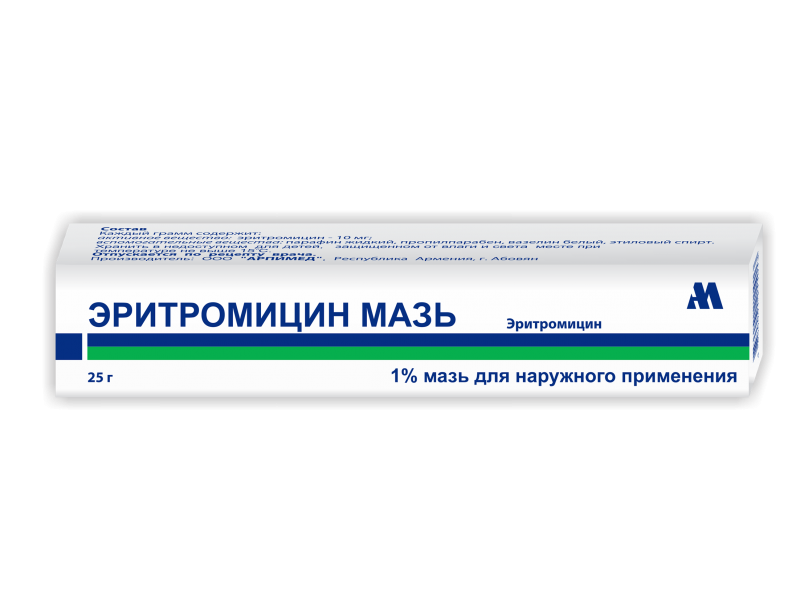 ATC subcategoryMacrolides (for local use)

Each gram of Erythromycin 1% ointment contains:

Erythromycin 1% ointment contains the active ingredient erythromycin, which is a type of medicine known as a macrolide antibiotic.

Erythromycin is a macrolide antibiotic. It interferes with bacterial protein synthesis by binding to the 50S subunit of ribosomes of sensitive organisms.

Erythromycin 1% ointment is applied to the skin to treat acne. The erythromycin works by attacking the bacteria associated with acne, Propionibacterium acnes. This is a common type of bacteria that feeds on sebum produced by the sebaceous glands in the skin. Although the mechanism of action of Erythromycin in reducing inflammatory lesions of acne vulgaris has not been conclusively shown, it is presumably due to its antibiotic action on sensitive bacteria, and in reducing follicular porphyrin fluorescence and free fatty acid levels of skin lipids.

By controlling bacterial numbers, erythromycin brings the inflammation of the sebaceous glands under control, and allows the skin to heal.

Pharmacokinetics
Only very small amounts of erythromycin appear to be absorbed systemically following topical application to the skin.
Uses and Administration

Topical, to the skin, two times a day, morning and evening.

This medicine is for external use only.

This medicine should not be used if you are allergic to one or any of its ingredients. Please inform your doctor or pharmacist if you have previously experienced such an allergy. In the event of irritation, stop using Erythromycin and consult your doctor.

Avoid getting this medicine in contact with your eyes, mouth or the inside of your nose. If accidental contact does occur, the area should be washed with lukewarm water.

The Propionibacterium is becoming more resistant to antibiotics. To help avoid the development of resistance, your doctor should avoid prescribing different antibiotics for you to take by mouth while you are using this antibiotic on your skin. You should not use this medicine for longer than necessary, however, treatment should usually be continued for at least six months.

In cases of accidental oral ingestion, treatment is symptomatic and supportive.

Contraindications
Patients with known hypersensitivity to erythromycin or other macrolide antibiotics should not use Erythromycin.
Adverse effects
Dryness, pruritus, erythema, desquamation and burning sensation have been reported following topical application of erythromycin.

Concomitant topical acne therapy should be used with caution because a cumulative irritant effect may occur, specially with the use of abrasive agents. The use of topical antimicrobial agents has been associated with the overgrowth of antibiotic-resistant organisms on the skin. Should this occur, administration should be discontinued and appropriate measures taken.

Your skin may be more likely to get dry or irritated if you are use other topical preparations on your skin, for example medicated cosmetics, soaps, toiletries or other anti-acne preparations, in combination with this medicine.

20g and 25 g of ointment is filled into aluminum tubes (inside package).
The tubes are packed and inserted with the leaflet into cardboard boxes (outer package).