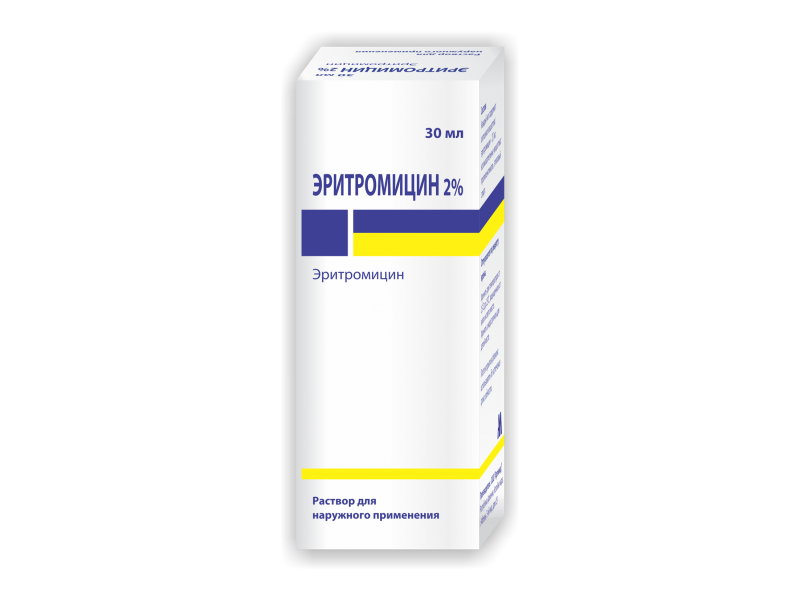 ATC categoryAgents for topical use. Dermatology

Each ml of Erythromycin 2% solution contains:

Erythromycin alcoholic solution contains the active ingredient erythromycin, which is a type of medicine known as a macrolide antibiotic.

Erythromycin is a macrolide antibiotic. It interferes with bacterial protein synthesis by binding to the 50S subunit of ribosomes of sensitive organisms.

Erythromycin solution is applied to the skin to treat acne. The erythromycin works by attacking the bacteria associated with acne, Propionibacterium acnes. This is a common type of bacteria that feeds on sebum produced by the sebaceous glands in the skin. Although the mechanism of action of Erythromycin in reducing inflammatory lesions of acne vulgaris has not been conclusively shown, it is presumably due to its antibiotic action on sensitive bacteria, and in reducing follicular porphyrin fluorescence and free fatty acid levels of skin lipids.

By controlling bacterial numbers, erythromycin brings the inflammation of the sebaceous glands under control, and allows the skin to heal.

Uses and Administration
Erythromycin is indicated for the topical treatment of moderate acne vulgaris.

Administration
Apply Erythromycin to the effected area twice daily after washing with soap and water.

This medicine is for external use only.

This medicine should not be used if you are allergic to one or any of its ingredients. Please inform your doctor or pharmacist if you have previously experienced such an allergy. In the event of irritation, stop using Erythromycin and consult your doctor.

Avoid getting this medicine in contact with your eyes, mouth or the inside of your nose. If accidental contact does occur, the area should be washed with lukewarm water.

The Propionibacterium is becoming more resistant to antibiotics. To help avoid the development of resistance, your doctor should avoid prescribing different antibiotics for you to take by mouth while you are using this antibiotic on your skin. You should not use this medicine for longer than necessary, however, treatment should usually be continued for at least six months. The application of other anti-acne agents for external application should not be earlier than in a hour after erythromycin solution use. In case of the accession of infection Erythromycin should be abolished and assign the appropriate therapy.

Accidental overdose is unlikely because of features of the local application of the drug. In cases of accidental oral ingestion, treatment is symptomatic and supportive.

Contraindications
Patients with known hypersensitivity to erythromycin or other macrolide antibiotics or propylene glycol should not use Erythromycin.
Adverse effects
Dryness, pruritus, skin erythema, desquamation of the epidermis, generalized urticaria, irritation, redness, eye irritation and burning sensation have been reported following topical application of erythromycin.

Concomitant topical acne therapy should be used with caution because a cumulative irritant effect may occur, specially with the use of abrasive agents. The use of topical antimicrobial agents has been associated with the overgrowth of antibiotic-resistant organisms on the skin. Should this occur, administration should be discontinued and appropriate measures taken.

Coadministration of Erythromycin with medications, causing desquamation of the epidermis (such as benzoyl peroxide, tretinoin, resorcinol, salicylic acid, sulfur) may increase erythromycin side effects.

Coadministration of another local antibacterial agent is contraindicated.

Erythromycin can not be used simultaneously with drugs that cause skin desquamation , as well as with cosmetic and hygienic products which cause skin dryness and irritation.

Erythromycin should not be used simultaneously with clindamycin, since they competitively bind to the 50S ribosomal subunit.

30 ml of 2% topical solution is filled into amber glass bottles (inside package).
The bottles are packed and inserted with the leaflet into cardboard boxes (outer package).