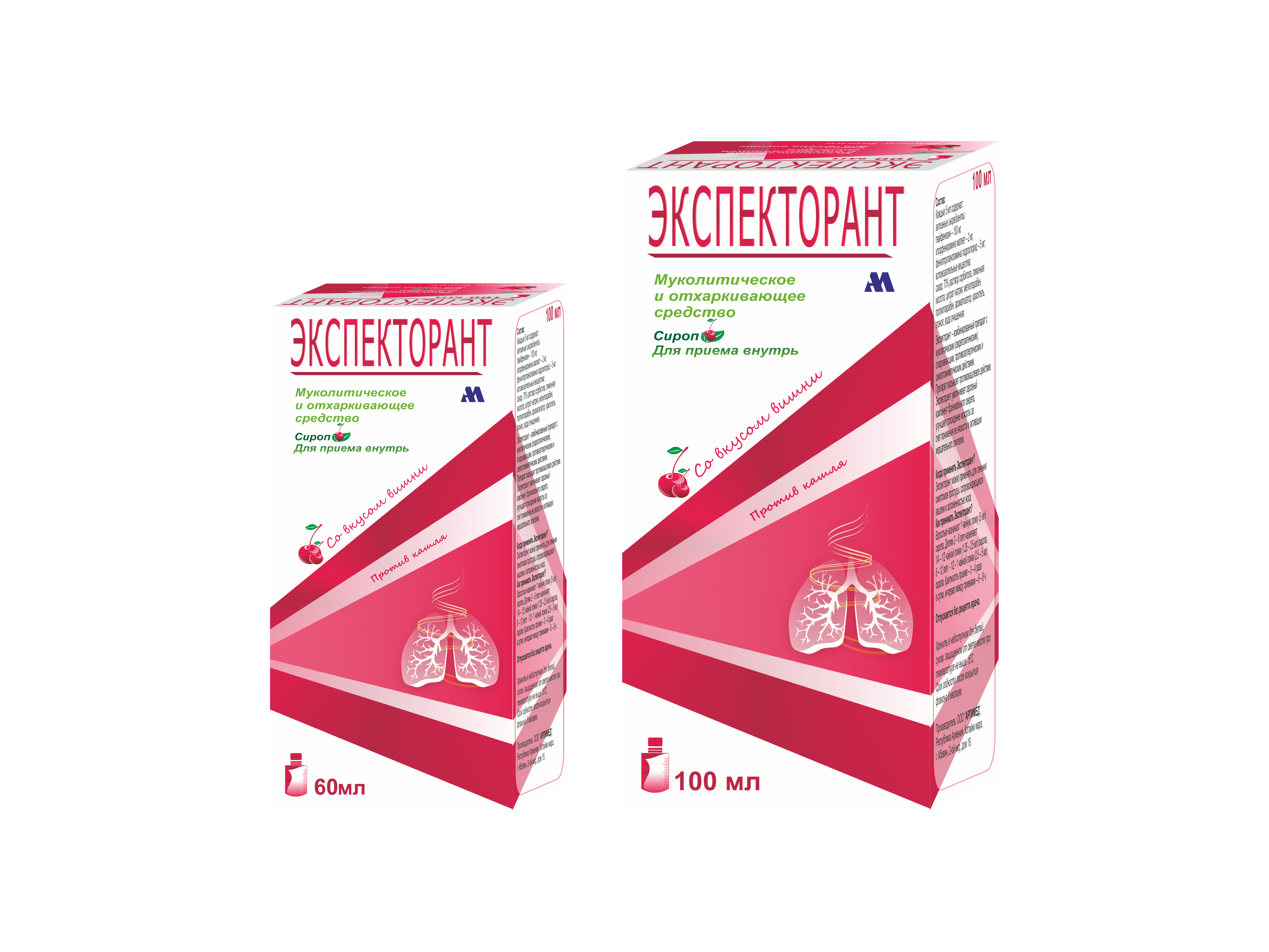 Drug formLiquid (for oral use)

Guaifenesin acts as an expectorant by increasing the volume and reducing the viscosity of secretions in the trachea and bronchi. Thus, it may increase the efficiency of the cough reflex and facilitate removal of the secretions.

Phenylpropanolamine hydrochloride is a sympathomimetic amine, which provides temporary relief of nasal congestion.

Chlorpheniramine maleate is an antihistamine that provides temporary relief of runny nose, sneezing and watery and itchy eyes.

Uses
The clinical uses of Expectorant is treatment of cough, nasal congestion and cold symptoms.
Dosage and administration
Administration of Expectorant syrup in children younger than 6 years of age should be directed by a physician.

Do not take more than 4 doses a day.

Unless your doctor approves, do not use these products if you have heart disease, high blood pressure, thyroid disease, diabetes, high pressure within the eye (glaucoma), an enlarged prostate gland, or a breathing problem such as emphysema or chronic bronchitis.

If you become dizzy or nervous, or have trouble sleeping, stop taking these products and check with your doctor.

You should also check with your doctor immediately if you have a severe sore throat that lasts for more than 2 days, or if your sore throat is accompanied or followed by fever, headache, rash, nausea, or vomiting.

These products may cause drowsiness. Be especially cautious when driving, and when operating machinery. This formulation can also cause excitability, especially in children.

Check with your doctor before using these products if you consume 3 or more alcoholic drinks a day. The acetaminophen they contain can cause liver damage.

Possible food and drug interactions
Do not use these products within 2 weeks of taking a drug classified as an MAO inhibitor.

If you are taking a tranquilizer, or a sleep aid, do not take this medication without your doctor’s approval; the combination could cause extreme drowsiness. For the same reason, avoid alcohol while taking these products.

Guaifenesin is reported to increase the volume and reduce the viscosity of tenacious sputum and is used as an expectorant for productive cough. Guaifenesin is thought to act as an expectorant by increasing the volume and reducing the viscosity of secretions in the trachea and bronchi. Thus, it may increase the efficiency of the cough reflex and facilitate removal of the secretions; however evidence for this is limited and conflicting.

Guaifenesin is absorbed from the gastrointestinal tract. It is metabolized and then excreted in the urine, as inactive metabolites.

Guaifenesin is indicated as an expectorant in the temporary symptomatic management of cough due to minor upper respiratory infections and related conditions, such as sinusitis, pharyngitis, and bronchitis, when these conditions are complicated by viscous mucus and congestion.

Gastrointestinal discomfort, nausea, and vomiting have occasionally been reported with guaifenesin, particularly in very large doses.

Porphyria: guaifenesin is considered to be unsafe in patients with porphyria because it has been shown to be porphyrogenic in animals.

Breast-feeding: it is known whether Guaifenesin is distributed into breast milk. However, problems in humans have not been documented.

Pediatric: caution is recommended in children up to 12 years of age with persistent or chronic cough, such as occurs with asthma, or if the cough is accompanied by excessive phlegm (mucus). The condition of these children may need a physician’s evaluation before Guaifenesin is administered.

Guaifenesin should not be given to children younger than 2 years of age unless recommended by physician.

Phenylpropanolamine is largely indirect-acting sympathomimetic with an action similar to that of ephedrine but less active as a CNS stimulant.

Phenylpropanolamine is readily and completely absorbed from the gastrointestinal tract, peak plasma concentrations being achieved about 1 to 2 hours after oral administration. It undergoes some metabolism in the liver, to an active hydroxylated metabolite, but up to 80 to 90% of a dose is excreted unchanged in the urine within 24 hours. The half-life has been reported to be about 3 to 5 hours.

Phenylpropanolamine is given by mouth as the hydrochloride for the symptomatic treatment of nasal congestion. It is frequently used in combination preparations for relief of cough and cold symptoms.

In the management of nasal congestion, Phenylpropanolamine hydrochloride is given in usual doses of up to 25 mg three of four times daily by mouth (a maximum dose 100 mg).

Tolerance to the therapeutic effects of Phenylpropanolamine has been reported with prolonged administration.

Irritability and distributed sleep have been reported in breast-fed infants.

Chlorpheniramine maleate, an alkylamine derivative, is a sedating antihistamine that causes a moderate degree of sedation; it also has antimuscarinic activity. Chlorpheniramine maleate diminishes or abolishes the major actions of histamine in the body by competitive, reversible blockade of histamine H1-receptor sites on tissues; it does not inactivate histamine or prevent its synthesis, nor, in most cases, its release. Histamine H1 receptors are responsible for vasodilation, increased capillary permeability, flare and itch reactions in the skin, and to some extent for contraction of smooth muscle in the bronchi and gastrointestinal tract.

Chlorpheniramine maleate is extensively metabolized. Metabolites include desmethyl- and didesmethylchlorpheniramine. Unchanged drug and metabolites are excreted primarily in the urine; excretion is dependent on urinary pH and flow rate: Only trace amounts have been found in the feces.

A duration of action of 4 to 6 hours has been reported; this is shorter than may be predicted from pharmacokinetic parameters.

More rapid and extensive absorption, faster clearance, and a shorter half-life have been reported in children.

Chlorpheniramine maleate is used for symptomatic relief of allergic conditions including urticaria and angioedema, rhinitis, and conjunctivitis, and in pruritic skin disorders. It is common ingredient of compound preparations for symptomatic treatment of coughs and common cold.

The most common side-effect of the sedating antihistamines in CNS depression, with effects varying from slight drowsiness to deep sleep, and including lassitude, dizziness, and in coordination (although paradoxical stimulation may occasionally occur, especially at high doses in children or the elderly). These sedative effects, when they occur, may diminish after a few days of treatment.

Palpitaions and arrhythmias have been reported.

Blood disorders, including agranulocytosis, leucopenia, haemolytic anaemia, and thrombocytopenia, although rare, have been reported.

Overdosage with sedating antihistamines is associated with antimuscarinic, extrapyramidal, and CNS effects. When CNS stimulation predominates over CNS depression, which is more likely in children or the elderly, it causes ataxia, excitement, tremors, psychoses, hallucinations, and convulsions; hyperpyrexia may also occur. Deepening coma and cardiorespiratory collapse may follow. In adults, CNS depression is more common with drowsiness, coma, and convulsions, progressing to respiratory failure and cardiovascular collapse.

Treatment of overdosage: treatment is symptomatic and supportive.

Drowsiness is a major problem with the chlorpheniramine and those affected should not drive or operate machinery; alcohol should be avoided.

Because of its antimuscarinic actions chlorpheniramine should be used with care in conditions such as angle-closure glaucoma, urinary retention, prostatic hyperplasia, or pyloroduodenal obstruction.

Occasional reports of convulsions in patients taking chlorpheniramine also calls for caution in patients with epilepsy.

The dosage reduction may be necessary in renal impairment.

Chlorpheniramine should not be given to neonates owing to its increased susceptibility to antimuscarinic effects. Elderly patients are also more susceptible to many of the adverse effects of chlorpheniramine and, in particular, its inappropriate use for postural giddiness should be avoided.

Chlorpheniramine has an additive antimuscarinic action with other antimuscarinic drugs, such as atropine and some antidepressants (both tricyclics and MAOIs).

Chlorpheniramine may suppress the cutaneous histamine response to allergen extracts and should be stopped several days before skin testing.

Chlorpheniramine might have delayed the hepatic metabolism of phenytoin thereby increasing the plasma concentrations.

3 years. Shelf life after opening the bottle is 6 months. Do not use after the expiration date.

To be dispensed without prescription.

Store in dry place at a temperature not higher than 150C, out of the reach of children. Protect from light.