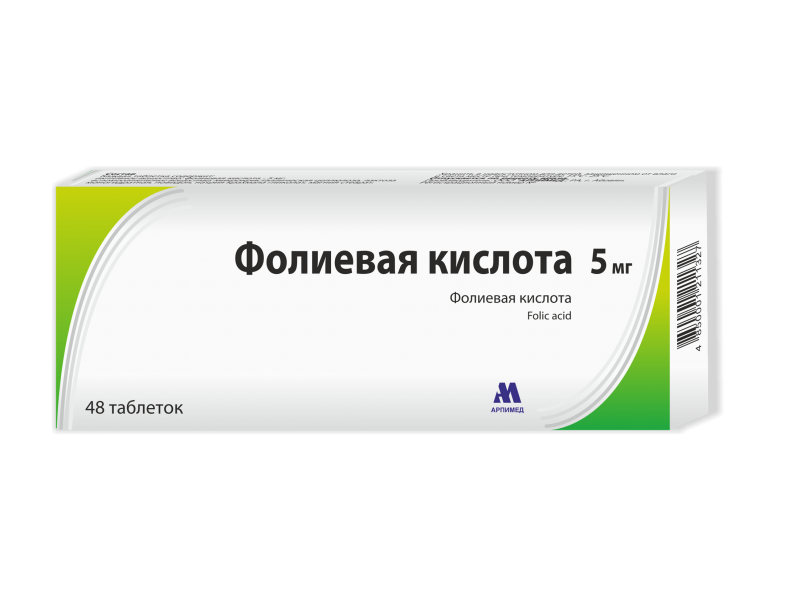 Folic acid is a member of the vitamin B group. Contains in fresh vegetables (beans, spinach, tomatoes, etc.)., also in the liver and kidneys of animals. The body is formed by intestinal microflora.

Folic acid is reduced in the body to tetrahydrofolate, which is a coenzyme for various metabolic processes including the synthesis of purine and pyrimidine nucleotides, and hence in the synthesis of DNA; it is also involved in some amino-acid conversions, and in the formation and utilization of formate. Deficiency, which can result in megaloblastic anaemia, develops when the dietary intake is inadequate (as in malnutrition), when there is malabsorption (as in sprue), increased utilization (as in pregnancy or conditions such as haemolytic anaemia), increased loss (as in haemodialysis), or as a result of the use of folate antagonists and other drugs that interfere with normal folate metabolism.

After oral administration folic acid, connecting in the stomach with the intrinsic factor of Castle (specific glycoprotein) is sucked into the upper part of the duodenum. Folic acid contained in food is absorbed on average two times worse than the drug.
The maximum concentration (Cmax) in blood is achieved in 30-60 minutes.

Folic acid is subjected to activation in the liver by the enzyme dihydrofolate reductase, undergoing rehabilitation and methylation to 5-methyltetrahydrofolate.
Folic acid is excreted with breast milk. Hemodialysis reduces the concentration of folic acid.
Excreted by the kidneys in an unmodified form or in the form of metabolites; partially displayed through the intestines.

For the treatment of megaloblastic anemia caused by folic acid deficiency – 5 mg once a day during 4 months. The maximum daily dose – 15 mg per day with malabsorption (violation of absorption in the gastrointestinal tract).
In chronic hemolytic states (Mediterranean anemia [Cooley anemia], sickle cell anemia) – 5 mg once 1-7 days, depending on the diet and the degree of hemolysis.
To prevent folate deficiency patients who are under dialysis, a similar dose administered.

For the prevention of fetal neural tube defects and other developmental abnormalities in 4 weeks prior to and during the first 3 months of the ensuing pregnancy – 4-5 mg per day.

Folic acid is generally well tolerated. In some cases, the allergic reaction can be observed.
From the digestive system: in some cases – nausea, vomiting.

In pernicious anemia, folic acid should be used only in conjunction with vitamin B12. Although folic acid stimulates hematopoiesis, it does not prevent the development of neurological complications (funicular myelosis etc.).

Long-term use of folic acid (especially at higher doses) is not recommended, since it is possible decrease in blood concentrations of vitamin B12.

Contraindications
– Increased sensitivity to folic acid.
– Pernicious anemia (a deficiency of vitamin B12).
Pregnancy and breastfeeding

Folic acid can be used in pregnancy in recommended doses indicated.
Folic acid is excreted into breast milk, therefore its use during breastfeeding is possible only on prescription.

With simultaneous use of sulfasalazine reduces the absorption of folic acid.

With simultaneous use folic acid reduces plasma concentrations of phenytoin, phenobarbital and primidone.

Yellow scored cylindrical tablets with a few small darker spots, the end surface of which are flat.