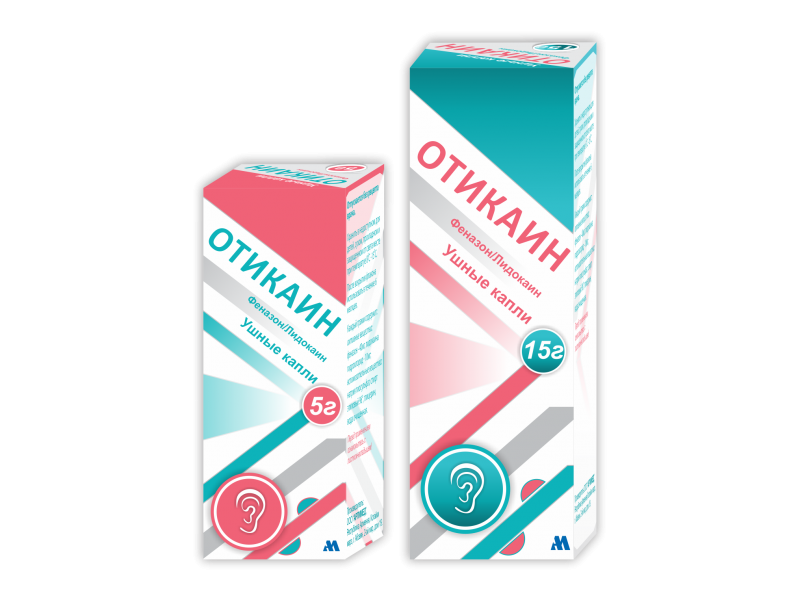 Each gram of ear drops contents:

Most clinically useful local anaesthetics have the same general chemical configuration of an amine portion joined to an aromatic residue by an ester or amide link. The type of linkage is important in determining the properties of the drug.

Lidocaine reversibly blocks nerve conduction nеаr its site of application or injection and thus produces temporary loss of feeling or sensation in а limited area of the body.

It acts by preventing the generation and transmission of impulses along nerve fibres and at nerve endings; depolarization and ion-exchange are inhibited. The effects are reversible. In general, loss of pain (analgesia) occurs before loss of sensory and autonomic function (anaesthesia) and loss of motor function (paralysis), but this may depend on the drug used and the site of administration.

Lidocaine produces reversible loss of function or sensation by preventing or diminishing the conduction of nerve impulses near to the site of their application. Because their mode of action is to decrease permeability of the nerve cell membrane to sodium ions, they also have a membrane stabilising effect.

Other methods of dermal delivery of local anaesthetics include a transdermal patch of lidocaine.

Solutions containing about 5% of phenazone have been used topically as ear drops in disorders such as acute otitis media. Simultaneously it may manifests an appropriate systemic farmacological action due to antiinflamatory and antipyretic available components. The anhydrous glycerin vehicle is hygroscopic and may provide a decongestant action.Antipyrin employed for it’s analgetic, antipyretic and antiinflamator effects.

NSAIDs are inhibitors of the enzyme cyclo-oxygenase. There are two forms of cyclo-oxygenase, COX-1, which is the constitutive form of the enzyme, and COX-2, which is the form induced in the presence of inflammation. Inhibition of COX-2 is therefore thought to be responsible for at least some of the analgesic, anti-inflammatory, and antipyretic properties of NSAIDs whereas inhibition of COX-1 is thought to produce some of their toxic effects, particularly those on the gastrointestinal tract.

Penetration of intact skin by most local anaesthetics is poor whereas absorption through mucous membranes may be rapid. However, reliable percutaneous anaesthesia can be achieved by application of a eutectic mixture of lidocaine and prilocaine to intact skin

Other methods of dermal delivery of local anaesthetics include a transdermal patch of lidocaine, and an iontophoretic drug delivery system incorporating lidocaine and adrenaline.

The onset action is 3-5 mionutes. It is ineffective when applied to intact skin/ Lidocaine may be absorbed following topical administration to mucosue membranes, its rate and extent of absorbtion depending upon concentration and total dose administered, the specific site of application , and duration of exposure.

Generally Lidocaine is metabolized in the liver and, in some cases, the kidneys. It is considerably bound with protein – 60-80%.The primary metabolite in urine is a conjugate of 4-hydroxy-2, 6-dimethylalanine.Less than 10% is excreted unchanged. Elimination half-life of about 12 hours.

Uses
Oticaine has been used for the local to relieve pain and inflammation in the congestive and serous stages of acute otitis media and to facilitate removal of cerumen from the wall of the ear canal. It is preferably used for treatment of otit externa – inflamation of the external auditory canal which may be due to bacteria, viruses or fungy, as well as secondary skeen disorders as eczema.
Dosage and administration
For adults and for children since birth day :topical, into the ear canal, a sufficient quantity 4 drops should be filled into the ear canal 2-3 times a day .

May warm medication to body temperature (370 C) by holding bottle in hand for a few minutes before using. Slowly fill ear canal while lying on side or tilting head with affected ear facing up. Keep ear facing up for 2-3 minutes. Not rinsing dropper after use; keeping container tightly closed. Discontinuing treatment if signs and symptoms of local allergic reaction occur. The bottle should be kept tightly closed. The course of treatment should not exceed 10 days.

Contraindications
Sensitivity to antipyrine or lidocaine.

Spontaneous perforation of or drainage through the eardrum membrane (increased risk of otorrhea and irritation).

Symptoms, such as vertigo, nausea, and nystagmus, which have been reported following the use of local anaesthetics in the external or middle ear, may result from penetration of the local anaesthetic into the inner ear.

Do not exceed the recommended dose and duration of treatment.

Do not use in chronic otitis media, as there may be systemic effects: stimulation of the central nervous system (nervousness, anxiety, confusion, blurred vision), depression (drowsiness, slowed breathing).

Pregnancy and breastfeeding
Data not available. Use during pregnancy and lactation only after consulting with your doctor.
Overdosage
At the overdose is no appreciable systemic absorption. In rare cases, a phenomenon referred to in paragraph contraindications symptoms and treatment.

Generaly Phenazone and Lidocaine affects the metabolism of some other drugs, and its metabolism is affected by other drugs, that increase or reduce the activity of liver enzymes. But in case of topical use absorbtion of mentioned above drugs is too negligible and there is no need of any troubles caution for other prescribed drug limitation.

When using Oticaine with other ear drops to maintain a minimum interval of 30 minutes between instillation.

A clear, colorless or light amber liquid with alcohol odor.

15 g of ear drops in the bottles. One bottle with the insert leaflet in the cardboard box.

Store at a temperature 8-150C, in a cool and dry place, out of the reach of children. Protect from light.