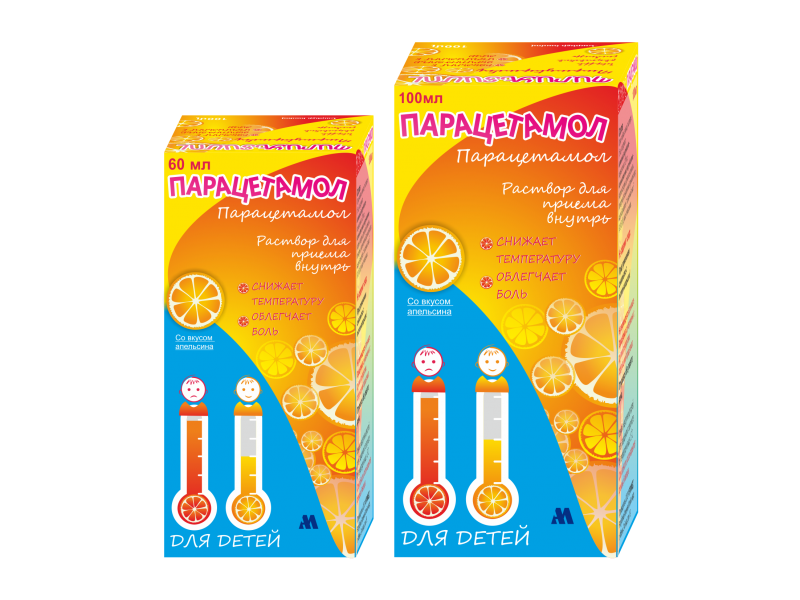 Drug formLiquid (for oral use)

ATC subcategoryNSAIDs for systemic use

Each 5 ml of oral solution contains:

Paracetamol oral solution is recommended for the relief of pains of teething, toothache and sore throats and for reducing fever often associated with colds and ‘flu’ and childhood infections such as chicken pox, whooping cough, measles and mumps.

Posology and method of administration

This product is intended for oral use in children ages:

If your baby was born prematurely and is less than 3 months old consult your doctor prior to use.

Paracetamol oral solution is for oral administration only.

Hypersensitivity to paracetamol or any of the other constituents.

Special warnings and precautions for use

Care is advised in the administration of paracetamol to patients with renal or hepatic impairment. The hazard of overdose is greater in those with noncirrhotic alcoholic liver disease.

Do not give with any other paracetamolcontaining products. Never give more medicine than shown in the table.

Do not give to babies less than 2 months of age.

For infants 23 months no more than 2 doses should be given. Do not give more than 4 doses in any 24 hour period.

Leave at least 4 hours between doses.

Do not give this medicine to your child for more than 3 days without speaking to your doctor or pharmacist.

As with all medicines, if your child is currently taking any medicine consult your doctor or pharmacist before taking this product.Keep out of the reach and sight of children.

If symptoms persist, consult your doctor.

Prolonged use except under medical supervision may be harmful.

If your baby was born prematurely and is less than 3 months old consult your doctor prior to use. Immediate medical advice should be sought in the event of an overdose, even if the patient feels well because of the risk of irreversible liver damage.

Contains Propylen glycol, which at 200mg/kg children may cause alcohol-like symptoms. Contains colouring agent sunset yellow FCF (E110), which may cause allergic reactions.

The speed of absorption of paracetamol may be increased by metoclopramide or domperidone and absorption reduced by cholestyramine.

The anticoagulant effect of warfarin and other coumarins may be enhanced by prolonged regular daily use of paracetamol with increased risk of bleeding; Occasional doses have no significant effect.

There is epidemiological evidence of the safety of paracetamol in human pregnancy. However, as with all drugs, caution should be exercised in its use in the first trimester. Paracetamol is excreted in breast milk. However, the level of paracetamol present is not considered to be harmful.

There have been rare reports of blood dyscrasias including thrombocytopenia and agranulocytosis but these were not necessarily causally related to paracetamol.

The frequency of adverse events associated with paracetamol are tabulated below.

Immediate medical attention (inhospital, if possible) is required in the event of overdose, even if there are no significant early symptoms. There may be no early symptoms following a lifethreatening overdose. Ingestion of more than 12 g paracetamol (24 standard 500 mg tablets) or more than 150 mg paracetamol per kg bodyweight (9 g paracetamol in a 60 kg individual), whichever is the smaller, can cause severe liver damage. Liver damage (as demonstrated by a rise in plasma transaminase levels) may be apparent between 8 and 36 hours following overdose.

Biochemical evidence of maximal damage, however, may not be attained until 7296 hours after ingestion of the overdose.

Intravenous Nacetylcysteine (NAC) is effective when initiated within 8 hours of the overdose. Efficacy declines progressively after this time, but NAC may provide some benefit up to and possibly beyond 24 hours. Oral methionine is also effective provided that it is given within 10 to 12 hours of the overdose. Activated charcoal should be considered if the dose of paracetamol ingested exceeds 12 g or 150 mg/kg, whichever is the smaller, and the procedure can be undertaken within 1 hour of the overdose. There is little evidence that undertaking gastric lavage will be of benefit to a patient in whom paracetamol is known to have been the only substance ingested.

Symptoms of paracetamol overdose in the first 24 hours may include pallor, nausea, vomiting, anorexia, and abdominal pain. Abnormalities of glucose metabolism and metabolic acidosis may occur. In severe poisoning, hepatic failure may progress to encephalopathy, coma and death.

Liver damage results when excess quantities of a toxic metabolite (usually adequately detoxified by glutathione when normal doses of paracetamol are ingested) become irreversibly bound to liver tissue. Acute renal failure with acute tubular necrosis may develop even in the absence of severe liver damage. Cardiac arrhythmias and pancreatitis have been reported.

Paracetamol is rapidly and almost completely absorbed from the gastro-intestinal tract. Concentration in plasma generally reaches a peak in 30-60 minutes; Plasma halflife is 1-4 hours. It is metabolised in the liver and excreted in the urine, mainly as the glucuronide and sulphate conjugates.

There are no preclinical data of relevance to the prescriber, which are additional to that already included in other sections of the SPC.

Do not use the medicine for more than 6 months after opening.

Store out of the reach of children, in dry place at a temperature not higher than 150C, protected from light.

Nature and contents of container

Special precautions for disposal and other handling