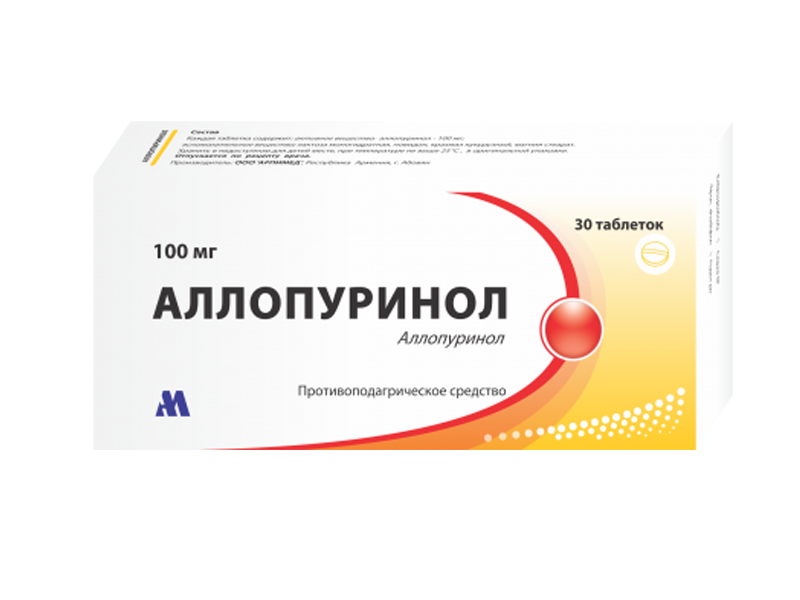 Accompanying the decrease in uric acid produced by Allopurinol is an increase in serum and urine concentrations of hypoxanthine and xanthine. Plasma concentrations of these oxypurines do not, however, rise commensurately with the fall in serum urate concentrations and are often 20–30% less than would be expected in view of urate concentrations prior to Allopurinol therapy. This discrepancy occurs because renal clearance of the oxypurines is at least 10 times greater than that of uric acid. In addition, normal urinary purine output is almost exclusively uric acid, but after treatment with Allopurinol, it is composed of uric acid, xanthine, and hypoxanthine, each having independent solubility. Thus, the risk of crystalluria is reduced. Alkalinization of the urine increases the solubility of the purines, further minimizing the risk of crystalluria. Decreased tubular transport of uric acid also results in increased renal reabsorption of calcium and decreased calcium excretion.

Allopurinol also interferes with de novo pyrimidine nucleotide synthesis by inhibiting orotidine 5′-phosphate decarboxylase. Secondary orotic aciduria and orotidinuria result. Orotic acid is highly insoluble and could form a heavy sediment of urinary crystals; however, the increased excretion of orotic acid and orotidine rarely exceeds 10% of the total pyrimidines synthesized by the body. In addition, enhanced conversion of uridine to uridine 5′-monophosphate usually occurs and, therefore, this partial inhibition of pyrimidine synthesis is considered innocuous.

Following oral administration, approximately 80–90% of a dose of Allopurinol is absorbed from the GI tract. Its plasma half-life is about 1 to 2 hours. Allopurinol’s major metabolite is oxipurinol (alloxanthine), which is also an inhibitor of xanthine oxidase with a plasma half-life of about 15 or more hours in patients with normal renal function, although this is greatly prolonged by renal impairment.

Allopurinol is used for prevention of hyperuricemiaduring chemotherapy in patients with cancer, leukemia, lymphoma.

It is not used for asymptomatic hyperuricaemia. Allopurinol is also used in the management of renal calculi caused by the deposition of calcium oxalate (in the presence of hyperuricosuria) and of 2,8-dihydroxyadenine. It may have the potential to reduce oxidative stress by blocking the production of free radicals and is an ingredient of kidney preservation solutions.

Allopurinol is used in chronic gout to correct hyperuricaemia, reduce the likelihood of acute attacks, and prevent the sequelae of chronic gout. Initially, it may increase plasma-concentrations of urate and uric acid by dissolving deposits. This can trigger or exacerbate acute attacks, hence allopurinol should not be started until an acute attack has completely subsided, and treatment should be started with a low dose increased gradually; an NSAID (but not aspirin or salicylates) or colchicine should also be given for at least 1 month after hyperuricaemia is corrected, usually 3 months. It may take several months to deplete the uric acid level sufficiently to control acute attacks.

A suggested starting dose of allopurinol is 100 mg daily by mouth, gradually increased by 100 mg for example at weekly intervals until the concentration of urate in plasma is reduced to 0.36 mmol/litre (6 mg per 100 ml) or less. A daily dose range of 100 to 300 mg may be adequate for those with mild gout and up to 600 mg for those with moderately severe tophaceous gout. The maximum recommended daily dose is 800 mg. Up to 300 mg may be taken as a single daily dose; larger amounts should be taken in divided doses to reduce the risk of gastric irritation. Taking allopurinol after food will also minimise gastric irritation. Patients should maintain an adequate fluid intake to prevent renal xanthine deposition.

Doses of allopurinol should be reduced in patients with renal impairment.

When used for the prevention of uric acid nephropathy associated with cancer therapy 600 to 800 mg may be given daily generally for 2 or 3 days before starting the cancer treatment. A high fluid intake is essential. In hyperuricaemia secondary to cancer or cancer chemotherapy, maintenance doses of allopurinol are similar to those used in gout and are given according to the response.

The main use of allopurinol in children is for hyperuricaemia associated with cancer or cancer chemotherapy or with enzyme disorders.

Excretion of allopurinol and its active metabolite oxipurinol is primarily via the kidneys and therefore the dosage should be reduced in renal impairment according to creatinine clearance (CC).

The most common adverse effect of allopurinol is skin rash. Rashes are generally maculopapular or pruritic, sometimes purpuric, but more serious hypersensitivity reactions may occur and include exfoliative rashes, the Stevens-Johnson syndrome, and toxic epidermal necrolysis. It is therefore recommended that allopurinol be withdrawn immediately if a rash occurs. Further symptoms of hypersensitivity include fever and chills, lymphadenopathy, leucopenia or leucocytosis, eosinophilia, arthralgia, and vasculitis leading to renal and hepatic damage and, very rarely, seizures. These hypersensitivity reactions may be severe, even fatal, and patients with hepatic or renal impairment are at special risk.

Hepatotoxicity and signs of altered liver function may also be found in patients not exhibiting hypersensitivity. Haematological effects include thrombocytopenia, aplastic anaemia, agranulocytosis, and haemolytic anaemia.

Patients with gout may experience an increase in acute attacks on beginning treatment with allopurinol, although attacks usually subside after several months.

Ingestion of up to 22.5 g allopurinol without adverse effect has been reported. Symptoms and signs including nausea, vomiting, diarrhoea and dizziness have been reported in a patient who ingested 20 g allopurinol. Recovery followed general supportive measures. Massive absorption of Allopurinol may lead to considerable inhibition of xanthine oxidase activity, which should have no untoward effects unless affecting concomitant medication, especially with 6-mercaptopurine and/or azathioprine. Adequate hydration to maintain optimum diuresis facilitates excretion of allopurinol and its metabolites. If considered necessary haemodialysis may be used.

Allopurinol should not be administered to individuals known to be hypersensitive to allopurinol or to any of the components of the formulation.

It is not recommended for the treatment of asymptomatic hyperuricemia.

Treatment should be stopped immediately if any skin reactions or other signs of hypersensitivity develop. A cautious reintroduction at a low dose may be attempted when mild skin reactions have cleared; allopurinol should not be reintroduced in those patients who have experienced other forms of hypersensitivity reaction. Dosage should be reduced in renal impairment and in hepatic impairment. Care is advised in patients being treated for hypertension or cardiac insufficiency, who may also have renal impairment.

To reduce the risk of renal xanthine deposition an adequate fluid intake (2 to 3 litres daily) is required. In addition, a neutral or slightly alkaline urine may be desirable.

Since adverse reactions such as somnolence, vertigo and ataxia have been reported in patients receiving allopurinol, patients should exercise caution before driving, using machinery or participating in dangerous activities until they are reasonably certain that allopurinol does not adversely affect performance.

Lactose intolerance: Allopurinol tablets contain lactose and therefore should not be administered to patients with rare hereditary problems of galactose intolerance, the Lapp lactase deficiency or glucose-galactose malabsorption.

Although there are no adequate and controlled studies to date using Allopurinol in pregnant women, the drug has been shown to be teratogenic in mice. Allopurinol should be used during pregnancy only when clearly needed.

Since Allopurinol and oxypurinol are distributed into milk, Allopurinol should be used with caution in nursing women.

Many drugs may increase serum urate concentrations, including most diuretics, pyrazinamide, diazoxide, alcohol, and mecamylamine. If these drugs are administered during allopurinol therapy, dosage of allopurinol may need to be increased.

Aspirin and the salicylates possess this activity and should generally be avoided in hyperuricaemia and gout.

An increase in hypersensitivity reactions, and possibly also other adverse effects, has been reported in patients receiving allopurinol with ACE inhibitors or thiazide diuretics, particularly in patients with renal impairment.

The metabolism of azathioprine and mercaptopurine is inhibited by allopurinol and their doses should be markedly reduced when either of them is given with allopurinol to avoid potentially life-threatening toxicity.

There have also been reports of allopurinol enhancing the activity of, and possibly increasing the toxicity of, a number of other drugs including some antibacterials, some anticoagulants, some other antineoplastics, ciclosporin, some sulfonylurea antidiabetics, theophylline, and vidarabine.

Allopurinol may inhibit hepatic oxidation of phenytoin but the clinical significance has not been demonstrated.

In healthy volunteers and HIV patients receiving didanosine, plasma didanosine Cmax and AUC values were approximately doubled with concomitant allopurinol treatment (300 mg daily) without affecting terminal half life. Co-administration of these 2 drugs is generally not recommended. If concomitant use is unavoidable, a dose reduction of didanosine may be required, and patients should be closely monitored.

Allopurinol may fail to reduce the blood-uric-acid concentrations when given at the same time as aluminium hydroxide. Intake of antacids and allopurinol should not separated by 3 hours.

3 blister packets with 10 tablets in the cardboard box.

Store at temperature not higher than 250C, out of the reach of children, in original pack.