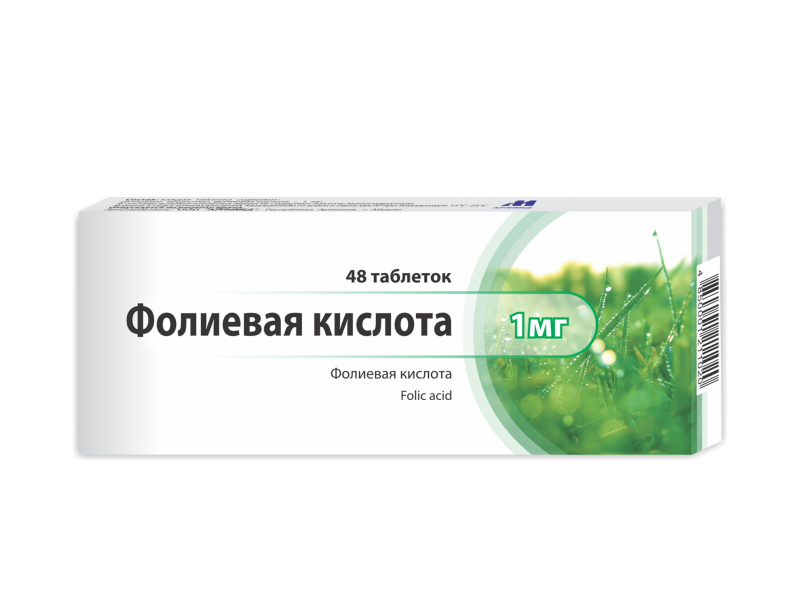 Folic acid is a member of the vitamin B group. Folic acid is reduced in the body to tetrahydrofolate, which is a coenzyme for various metabolic processes including the synthesis of purine and pyrimidine nucleotides, and hence in the synthesis of DNA; it is also involved in some amino-acid conversions, and in the formation and utilisation of formate. Deficiency, which can result in megaloblastic anaemia, develops when the dietary intake is inadequate (as in malnutrition), when there is malabsorption (as in sprue), increased utilisation (as in pregnancy or conditions such as haemolytic anaemia), increased loss (as in haemodialysis), or as a result of the use of folate antagonists and other drugs that interfere with normal folate metabolism.

Body stores of folate in healthy persons have been reported as being between 5 to 10 mg, but may be much higher. In the UK about 150 to 200 micrograms of folate daily is considered a suitable average intake for all healthy persons except women of child-bearing potential and pregnant women who require additional folic acid to protect against neural tube defects in their offspring. In the US the recommended dietary allowance is 400 micrograms of dietary folate equivalents in both men and women. Folate is present, chiefly combined with several l(+)-glutamic acid moieties, in many foods, particularly liver, kidney, yeast, and leafy green vegetables. The vitamin is readily oxidised to unavailable forms and is easily destroyed during cooking.

Folic acid is rapidly absorbed from the gastrointestinal tract, mainly from the duodenum and jejunum. Dietary folates are stated to have about half the bioavailability of crystalline folic acid. The naturally occurring folate polyglutamates are largely deconjugated, and then reduced by dihydrofolate reductase in the intestines to form 5-methyltetrahydrofolate, which appears in the portal circulation, where it is extensively bound to plasma proteins. Folic acid given therapeutically enters the portal circulation largely unchanged, since it is a poor substrate for reduction by dihydrofolate reductase. It is converted to the metabolically active form 5-methyltetrahydrofolate in the plasma and liver.

The principal storage site of folate is the liver; it is also actively concentrated in the CSF.

Folate undergoes enterohepatic circulation. Folate metabolites are eliminated in the urine and folate in excess of body requirements is excreted unchanged in the urine. Folate is distributed into breast milk. Folic acid is removed by haemodialysis.

Uses
Folic acid has few indications for long-term therapy since most causes of folate deficiency are self-limiting or will yield to a short course of treatment.

For prophylaxis in chronic haemolytic states or in renal dialysis, folic acid is given daily or sometimes weekly, depending on the diet and the rate of haemolysis.

For the treatment of folate-deficient megaloblastic anaemia it is recommended in the UK that folic acid is given orally in doses of 5 mg daily for 4 months; up to 15 mg daily may be necessary in malabsorption states. Continued oral dosage with folic acid 5 mg every 1 to 7 days may be necessary in chronic haemolytic states such as thalassaemia major or sickle-cell anaemia, depending on the diet and rate of haemolysis; similar doses may be necessary in some patients receiving renal dialysis in order to prevent deficiency. The BNFC recommends an oral dose of 500 micrograms/kg once daily for folate-dependent megaloblastic anaemia in children up to the age of 1 year; older children may be given similar doses to those in adults. For prophylaxis of folate deficiency in children on dialysis it suggests 250 micrograms/kg once daily by mouth from 1 month to 12 years of age, and 5 to 10 mg daily in older children.

In the USA the usual recommended therapeutic dose for folate deficiency is lower; folic acid 0.25 to 1 mg daily by mouth is suggested until a haematopoietic response has been obtained, although some patients require higher doses, especially in malabsorption states. The usual maintenance dose is 400 micrograms daily.

In the prophylaxis of megaloblastic anaemia of pregnancy, the usual dose is 200 to 500 micrograms daily in the UK.

Folic acid should never be given alone or with inadequate amounts of vitamin B12 for the treatment of undiagnosed megaloblastic anaemia, since folic acid may produce a haematopoietic response in patients with a megaloblastic anaemia due to vitamin B12 deficiency without preventing aggravation of neurological symptoms. This masking of the true deficiency state can lead to serious neurological damage, such as subacute combined degeneration of the spinal cord.

Contains lactose monohydrate. Patients with rare hereditary problems of galactose intolerance , the Lapp lactose deficiency or glucose-galactose malabsorption should not take this medicine.

Contraindications
Should never be given alone for pernicious anaemia and other vitamin-B12 deficiency states (may precipitate subacute combined degeneration of the spinal cord.
Drug interactions

Folate deficiency states may be produced by drugs such as antiepileptics, oral contraceptives, antituberculous drugs, alcohol, and folic acid antagonists such as methotrexate, pyrimethamine, triamterene, trimethoprim, and sulfonamides. In some instances, such as during methotrexate or antiepileptic therapy, replacement therapy with folinic acid or folic acid may become necessary in order to prevent megaloblastic anaemia developing; folate supplementation has reportedly decreased serum-phenytoin concentrations in a few cases and there is a possibility that such an effect could also occur with barbiturate antiepileptics.

Yellow scored cylindrical tablets with a few small darker spots, the end surface of which are flat.