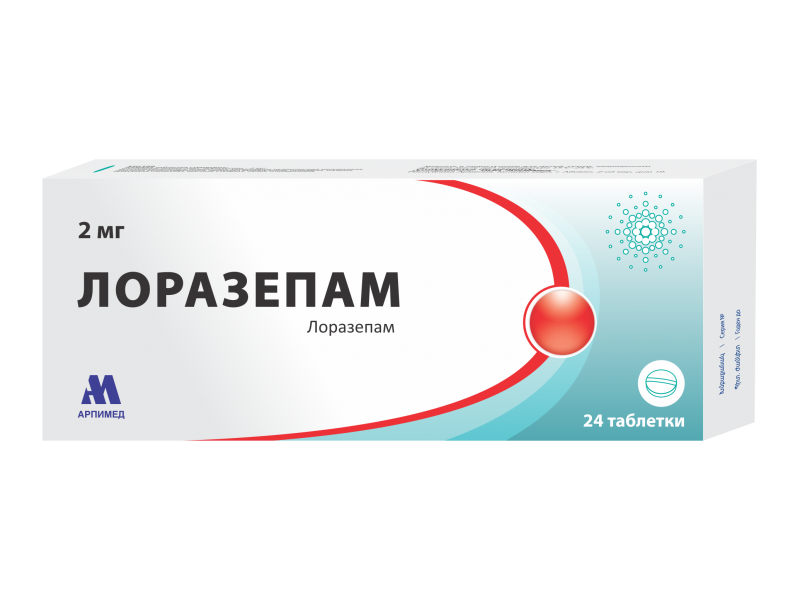 Lorazepam is a short-acting benzodiazepine.

The exact sites and mode of action of the benzodiazepines have not been fully elucidated, but the effects of the drugs appear to be mediated through the inhibitory neurotransmitter
g-aminobutyric acid (GABA). The drugs appear to act at the limbic, thalamic, and hypothalamic levels of the CNS, producing anxiolytic, sedative, hypnotic, skeletal muscle relaxant, and anticonvulsant effects. Benzodiazepines are capable of producing all levels of CNS depression-from mild sedation to hypnosis to coma.

Anxyolytic and possibly paradoxical CNS stimulatory effects of benzodiazepines are postulated to result from release of previously suppressed responses (disinhibition). After usual doses of benzodiazepines for several days, the drugs cause a moderate decrease in rapid eye movement (REM) sleep. REM rebound does not occur when the drugs are withdrawn. Stage 3 and 4 sleep are markedly reduced by usual doses of the drugs; the clinical importance of these sleep stage alterations has not been established.

Lorazepam is readily absorbed from the gastrointestinal tract following oral administration, with a bioavailibility of about 2 hours after an oral dose. The absorption profile after intramuscular injection is similar to that after administration by mouth.

The bioavailability of Lorazepam is about 95 to 99%.Lorazepam is about 85% bound to plasma protein. It crosses the blood-brain barrier and the placenta; it is also distributed into breast milk. Lorazepam is metabolized in the liver to the inactive glucuronate, and excreted in urine. The elimination half-life has been reported to range from about 10 to 20 hours. 88% of the dose is excreted primarily in urine, of which – 75% in the form of glucuronides.

Uses and administration
Lorazepam is a short-acting benzodiazepine with general properties similar to those of diazepam. It is used in the short-term treatment of anxiety disorders, as a hypnotic in the short-term management of insomnia, and as an anticonvulsant in the management of status epilepticus. It is also used for its sedative and amnestic properties in premedication and in antiemetic regimens for the control of nausea and vomiting associated with cancer chemotherapy.

Lorazepam is usually given by mouth or by injection as the base although the pivalate is available for oral administration in some countries. Lorazepam should be given in reduced dosage to elderly or debilitated patients; one-half the usual adult dose may be sufficient.

The usual dose of Lorazepam by mouth for the treatment of anxiety disorders is 1 to 6 mg daily in 2 or 3 divided doses with the largest dose taken at night; up to 10 mg daily has been given. A single oral dose of 1 to 4 mg at bedtime may be given for insomnia associated with anxiety.

For premedication adults may be given a dose of 2 to 3 mg by mouth the night before the operation followed if necessary the next morning by a smaller dose. Alternatively, 2 to 4 mg may be given 1 to 2 hours before an operation.

A dose of 1 to 2 mg of Lorazepam by mouth given with dexamethasone before chemotherapy has been suggested for prevention of acute symptoms in patients at increased risk of antineoplastic-induced emesis.

Child not recommended up to 18 year.

Drowsiness, sedation, muscle weakness, and ataxia are the most frequent adverse effects of Lorazepam use. They generally decrease on continued administration and are a consequence of CNS depression. Less frequent effects include vertigo, headache, confusion, depression, slurred speech or dysarthria, changes in libido, tremor, visual disturbances, urinary retention or incontinence, gastrointestinal disturbances, changes in salivation, and amnesia. Some patients may experience a paradoxical excitation, which may lead to hostility, aggression, and disinhibition. Jaundice, blood disorders and hypersensitivity reactions have been reported rarely. Respiratory depression and hypotension occasionally occur with high dosage and parenteral administration. Raised liver enzyme values have occurred.

The development of dependence is common after regular use of Lorazepam, even in therapeutic doses for short periods. Dependence is particularly likely in patients with a history of alcohol or drug abuse and in patients with marked personality disorders. Benzodiazepines should not therefore be discontinued abruptly after regular use for even a few weeks, but should be withdrawal by gradual reduction of the dose; the time needed for withdrawal can vary fro about 4 weeks to a year or more. The extent to which tolerance occurs has been debated but appears to involve psychomotor performance more often than anxiolytic effects. Drug-seeking behavior is uncommon with therapeutic doses of benzodiazepines. High doses of Lorazepam, injected intravenously, have been abused for their euphoriant effects.

The mechanism of benzodiazepine dependence is unclear. One possible mechanism is a relative deficiency of functional gamma-aminobutyric acid (GABA) activity resulting from down-regulation of GABA receptors.

With increased awareness of the problems of benzodiazepine dependence, emphasis has been placed on prevention by proper use and careful patient selection. Benzodiazepines should be reserved for the short-term relief (2 to 4 weeks only) of anxiety that is severe, disabling, or subjecting the individual to unacceptable distress and is occurring alone or in association with insomnia or short-term psychosomatic, organic, or psychotic illness. Benzodiazepines can be withdrawn in steps of about one-eight of the daily dose every fortnight (range one-tenth to one-quarter). Clinicians often favour transferring the patient to an equivalent dose of diazepam given at night (for the purpose of withdrawal regimens, 0.5 mg of lorazepam may be considered roughly equivalent to 5 mg of diazepam). The daily dosage of diazepam can then be reduced in steps of 0.5 to 2.5 mg at fortnight intervals. If troublesome abstinence effects occur the dose should be held level for a longer period before further reduction; increased dosage should be avoided if possible. It is better to reduce too slowly than too quickly. Time required for withdrawal can vary from about 4 weeks to a year or longer.

Adjuvant therapy should generally be avoided although a bet blocker may be given for prominent sympathetic over activity and an antidepressant for clinical depression. Antipsychotic drugs may aggravate symptoms.

Due to the presence of lactose monohydrate 38.8 mg, the drug should not be used in patients with hereditary lactose intolerance, Lapp lactase deficiency or glyukosogalactosic malabsorption.

Lorazepam is not recommended for use in patients less than 18 years of age.

Lorazepam should be avoided in patients with pre-existing CNS depression or coma, respiratory depression, acute pulmonary insufficiency, or sleep apnoea, and used with care in those with chronic pulmonary insufficiency. Lorazepam should be given with care to elderly or debilitated patients who may be more prone to adverse effects. Caution is required in patients with muscle weakness, or impaired liver or kidney function; its use should be avoided in severe hepatic impairment. The sedative effects of Lorazepam are most marked during the first few days of administration; affected patients should not drive or operate machinery. Monitoring of cardio-respiratory function is generally recommended when benzodiazepines are used for sleep sedation.

Lorazepam is not appropriate for the treatment of chronic psychosis or for phobic or obsessional states. Lorazepam-induced disinhibition may precipitate suicide or aggressive behaviour and it should not, therefore, be used alone to treat depression or anxiety associated with depression; it should also be used with care in patients with personality disorders. Caution is required in patients with organic brain changes particularly arteriosclerosis. In cases of bereavement, psychological adjustment may be inhibited by Lorazepam.

At the regular use of lorazepam required periodic monitoring of peripheral blood picture.

Geriatrics
Geriatric patients ate usually more sensitive to the CNS effects of benzodiazepines. It is recommended that dosage be limited to the smallest effective dose and increased gradually, if necessary, to decrease the possibility of development of ataxia, dizziness, and oversedation, which may lead to falls and other accidents.

Lorazepam crosses the placenta. Benzodiazepines have been reported to increase the risk of congenital malformations when used during the first trimester of pregnancy. Risk-benefit must be considered carefully. However, since the use of benzodiazepines (with possible exception of anticonvulsant use) is rarely a matter of urgency, it should be avoided during pregnancy, especially during the first trimester. The possibility that a woman of childbearing potential may already be pregnant should be considered when initiating benzodiazepine treatment.

Regular use of benzodiazepines during pregnancy may cause physical dependence with resulting withdrawal symptoms in the neonate.

Use of benzodiazepine hypnotics during the last weeks of pregnancy has resulted in neonatal CNS depression, neonatal flaccidity, feeding difficulties, hypothermia, and respiratory problems.

Children, especially the very young, are usually more sensitive to the CNS effects of benzodiazepines.

Overdosage
Overdosage can produce CNS depression and coma or paradoxical excitation. However, fatalities are rare when taken alone.

Treatment: The treatment of benzodiazepine overdosage is generally symptomatic and supportive. Activated charcoal may be given to those patients who have taken more than 0.1 mg per kg body-weight of Lorazepam and who present within 1 hour. Gastric lavage is generally not advocated in overdoses of benzodiazepines alone. The specific benzodiazepine antagonist, flumazenil, is rarely required; if used expert advice is essential since serious adverse effects may occur in patients dependent on benzodiazepines. It should be used with extreme caution, if at all, in multiple drug overdoses or for the differential diagnosis of unclear cases of overdose. Hemodialysis is ineffective.

Enhanced sedation or respiratory and cardiovascular depression may occur if Lorazepam is given with other drugs that have CNS-depressant properties; these include alcohol, antidepressants, antihistamines, antipsychotics, general anaesthetics, other hypnotics or sedatives, and opioid analgesics. The sedative effect of benzodiazepines may also be enhanced by cisapride. Adverse effects may also be produced by concomitant administration with drugs, which interfere with the metabolism of benzodiazepines.

White or off white scored cylindrical tablets with a few small darker spots, the end surface of which are flat.

1 blister packet with 24 tablets in the cardboard box.