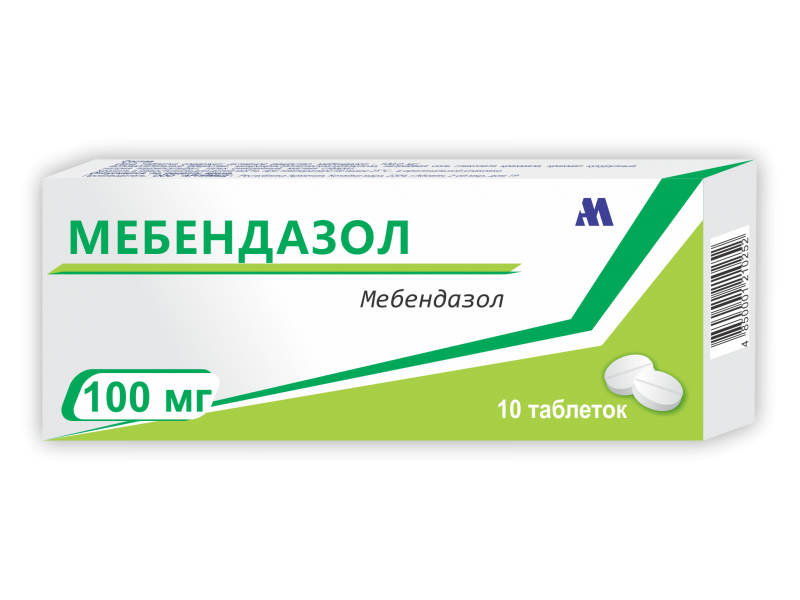 Mebendazole, a benzimidazole carbamate derivative, is an anthelmintic with activity against most nematodes and some other worms; activity against some larval stages and ova has also been demonstrated.

Although the exact mechanism of anthelmintic activity of mebendazole has not been fully elucidated, the drug appears to cause selective and irreversible inhibition of the uptake of glucose and other low molecular weight nutrients in susceptible helminths; inhibition of glucose uptake appears to result in endogenous depletion of glycogen stores in the helminth. Mebendazole does not inhibit glucose uptake in mammals. Mebendazole appears to cause degenerative changes in the intestine of nematodes and in the absorptive cells of cestodes. The principal anthelmintic effect of the drug appears to be degeneration of cytoplasmic microtubules within these intestinal and absorptive cells. Microtubular deterioration results in inhibition of organelle movement and interferes with the absorptive and secretory function. As a result of excessive accumulation of intracellular transport secretory granules, hydrolytic and proteolytic enzymes are released and cause cellular autolysis. This irreversible damage leads to death of the parasite.

Mebendazole has no effect on blood glucose concentrations in humans, and examination of the intestine and other organs of treated animals has shown an intact microtubular system and normal subcellular organelles. The presence of food in the digestive tract of the definitive host does not affect the action of the drug during treatment of intestinal helminthic infections.

Absorption: mebendazole appears to be minimally absorbed from the GI tract following oral administration. Limited data indicate that about 2–10% of an oral dose is absorbed. Peak plasma concentrations of mebendazole occur approximately 0.5–7 hours after oral administration of the drug and exhibit wide interpatient variation.

Elimination: the elimination half-life of mebendazole has been reported to be about 2.8–9 hours.

Although the exact metabolic fate of mebendazole has not been fully determined, the drug is metabolized via decarboxylation to 2-amino-5(6)-benzimidazolyl phenylketone; this metabolite does not have anthelmintic activity.

Approximately 2–10% of an oral dose of mebendazole is excreted in urine within 24–48 hours of administration, principally as unchanged drug and the 2-amino metabolite. The metabolic fate and rate of excretion of unabsorbed mebendazole have not been determined.

Uses
Mebendazole, being poorly absorbed from the gastrointestinal tract, is used principally in the treatment of the intestinal nematode infections ascariasis (roundworm infection), enterobiasis (pinworm or threadworm infections), hookworm (ancylostomiasis and necatoriasis), and trichuriasis (whipworm infection). The drug’s broad spectrum of activity makes it useful in the treatment of mixed helminthic infections. During treatment with Mebendazole, migration of worms with expulsion through the mouth and nose has occurred in some patients heavily infected with Ascaris. Mebendazole is also used in the treatment of capillariasis and trichostrongyliasis and has been used in strongyloidiasis. Other nematode infections which may respond to Mebendazole are infection with the filarial nematode Mansonella perstans, and the tissue infections toxocariasis and trichinosis.
Dosage and administration
Mebendazole is given by mouth. The tablets may be crushed and mixed with food. Special diets, fasting, or purgation prior to administration of the drug is not necessary. Patients should be advised of hygienic precautions needed to minimize reinfection, such as wearing shoes, washing hands with soap and cleaning under fingernails often during the day (especially before eating and after using the toilet), and washing all fruits and vegetables thoroughly before eating them.

At usual recommended dosages (i.e., 100–200 mg daily), Mebendazole appears to cause minimal adverse effects. Adverse effects appear to occur more frequently when higher dosages (e.g., those used in the treatment of extraintestinal infections such as hydatid disease) are used, and may be related to effects resulting from drug-induced killing of the parasites in some cases.

Since Mebendazole is poorly absorbed from the gastrointestinal tract at the usual therapeutic doses, adverse effects have generally been restricted to gastrointestinal disturbances, such as transient abdominal pain and diarrhoea, and have tended to occur in patients being treated for heavy intestinal infection. Headache and dizziness have been reported. Adverse effects have been reported more frequently with the high doses tried in echinococcosis and have included allergic reactions, raised liver enzyme values, alopecia, and bone marrow depression.

In patients treated at dosages substantially higher than recommended or for prolonged periods of time, the following adverse reactions have been reported rarely: alopecia, reversible liver function disturbances, hepatitis, agranulocytosis, neutropenia and glomerulonephritis. With the exception of agranulocytosis and glomerulonephritis, these also have been reported in patients who were treated with mebendazole at standard dosages .

Symptoms
In the event of accidental overdosage, abdominal cramps, nausea, vomiting and diarrhoea may occur.

Treatment
There is no specific antidote. Within the first hour after ingestion, gastric lavage may be performed. Activated charcoal may be given if considered appropriate.ered appropriate.

Contraindications
Patients receiving high doses of Mebendazole, such as those with echinococcosis, should be supervised closely with blood counts and liver function being monitored; such high-dose therapy may be inappropriate in those with hepatic impairment.

Mebendazole is contraindicated in patients who are hypersensitive to the drug.

Organ system function (including hematopoietic and hepatic) should be assessed periodically during prolonged mebendazole therapy.

Pregnancy and breastfeeding
Mebendazole is teratogenic in rats and there are no adequate and well controlled studies in human pregnancy. Mebendazole is therefore usually contra-indicated during pregnancy.

Since it is not known if mebendazole is distributed into milk, the drug should be used with caution in nursing women.

Phenytoin or carbamazepine have been reported to lower plasma-mebendazole concentrations in patients receiving high doses for echinococcosis, presumably as a result of enzyme induction; valproate had no such effect.

Plasma concentrations of Mebendazole have been raised when the enzyme inhibitor cimetidine was also given, and this has resulted in the resolution of previously unresponsive hepatic hydatid cysts.