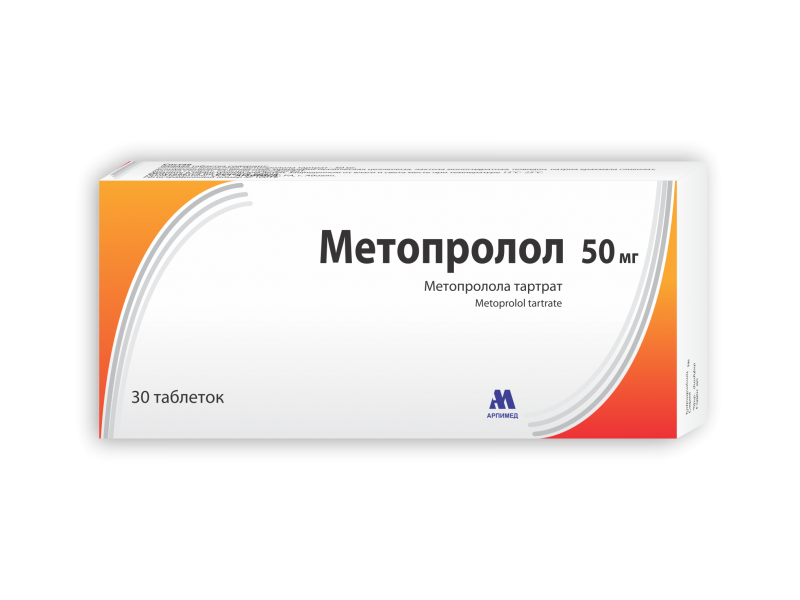 Metoprolol is a beta1-selective (cardioselective) adrenergic blocking agent. Metoprolol reduces production of cAMP from ATP, stimulated by katecholamines. It reduces the chronotrop, dromotrop and batmotrop activity and has a negative inotrop action on heart muscles. As a result of this mechanism the heart rate falls, the recovery time in sinus node increases as well as the refractory time in the atrioventricular node. This lead to atrial stimulation and prolongation of atrioventricular interval. These processes simultaneously stipulate the less cardiac output demand of oxygen, and, connected with these thereafter lessen the oxygen necessity. All of these mechanisms leads to antianginal effect. Metoprolol removes the activity of sympathetic system, fallen down the heart rate in tachycardia, reduces the quantity of cAMP, acting as a antiarhthmic agent. Metoprolol reduces the renin-angiotensin system activity those acting as a hypotensive agent. Via the reciproc mechanism of the sympathetic system the peripheral resistance of vessels is increasing, but only at the beginning of giving drug during the first 2-3 days.

This preferential effect is not absolute, at higher plasma concentrations metoprolol inhibits beta2-adrenoreceptors too, chiefly located in the bronchial and vascular musculature. Metoprolol has no intrinsic sympathomimetic activity, and membrane-stabilizing activity is detectable only at plasma concentrations much greater than required for beta-blockade. Animal and human experiments indicate that metoprolol slows the sinus rate and decreases AV nodal conduction. Metoprolol is an optically active enantiomer. S isomer is more active than R isomer.

Absorbtion and Distribution: When administered orally, Metoprolol is readily and completely absorbed from the gastrointestinal tract but is subject to considerable first-pass metabolism, with a bioavailability of about 50%. It is moderately lipid-soluble. Bioavailability of metoprolol increases with the meals and via the concomitantly following treatment with metoprolol. Metoprolol crosses the blood-brain barrier and the placenta.

Metabolism: Metabolism realizes mainly by biotransformation in the liver by cytochrome P450 isoenzyme and therefore exhibits a debrisoquine-type genetic polymorphism with poor metabolisers of metoprolol, also being poor metabolisers of debrisoquine. Metoprolol is a racemic mixture of R- and S- enantiomers and exhibits stereoselective metabolism. The rate of metabolism by CYP2D6 is determined by genetic polymorphism; CYP2D6 absents in about 8% of Caucasians (poor metabolizers) and about 2% of most other populations.

None of the metabolites of metoprolol contribute significantly to its beta-blocking effect.

Elimination: The metabolites are excreted in the urine together with only small amounts of unchanged metoprolol (less than 5% of an oral dose of metoprolol); the rest is excreted by the kidneys as metabolites that appear to have no beta-blocking activity.

Only a small fraction of the drug (about 12%) is bound to human serum albumin.

Poor CYP2D6 metabolizers exhibit several-fold higher plasma concentrations of Metoprolol than extensive metabolizers with normal CYP2D6 activity. Cmax ranges from 5 up to 22 ng/ml. Average mean of AUC (area under curve) during the interval 0-48 hours is 5,61 ± 0,2. Relative bioavailability thereafter 117 ± 40 %, absolute 60 %. Peak plasma concentrations vary widely and occur about 1.5 to 2 hours after a single oral dose. It depends on individual metabolism and the plasma half-life ranges from approximately 3 to 7 hours.

The elimination half-life of metoprolol is about 7.5 hours in (PM) poor metabolizers and 2.8 hours in (EM) extensive metabolizers. However, the CYP2D6 dependent metabolism of Metoprolol seems to have little or no effect on safety or tolerability of the drug. The systemic availability and half-life of metoprolol in patients with renal failure do not differ to a clinically significant degree from those in normal subjects. Consequently, no reduction in dosage is usually needed in patients with chronic renal failure.

Reduced doses should be given to patients with hepatic impairment.

Beta-adrenergic receptor blockade is useful in the treatment of angina, hypertension, and heart failure.

There are situations in which sympathetic stimulation is vital. In patients with severely damaged hearts, adequate ventricular function may depend on sympathetic drive. In the presence of AV block, beta-blockade may prevent the necessary facilitating effect of sympathetic activity on conduction. Beta2-adrenergic blockade results in passive bronchial constriction by interfering with endogenous adrenergic bronchodilator activity in patients subject to bronchospasm and may also interfere with exogenous bronchodilators in such patients.

Patients should be advised to take metoprolol tablets regularly and continuously, as directed, preferably with or immediately following meals.

In hypertension metoprolol is usually given in an initial dose of 100 mg daily by mouth, increased weekly according to response to 400 mg daily; it may be taken as a single daily dose or twice daily. A usual maintenance dose is 100 to 200 mg daily. The dose should be taken with or immediately following a meal.

The usual dose for angina pectoris is 50 to 100 mg two or three times daily by mouth.

Metoprolol is also used as an adjunct in the early management of acute myocardial infarction. Treatment should be given within 12 hours of the onset of chest pain; After 15 minutes, in patients who have received the full intravenous dose, oral treatment should be started; 50 mg is given every 6 hours for 2 days. In patients who have failed to tolerate the full intravenous dose a reduced oral dose should be given as, and when, their condition permits. Subsequent maintenance dosage is 100 mg given twice daily by mouth. In patients who did not receive metoprolol by intravenous injection as part of the early management of myocardial infarction, metoprolol 100 mg twice daily by mouth may be started once the clinical condition of the patient stabilises.

In the management of stable, symptomatic heart failure metoprolol succinate may be given as a modified-release preparation. The initial dose is the equivalent of metoprolol tartrate 12.5 to 25 mg once daily, increased as tolerated, at intervals of 2 weeks, to a maximum of 200 mg once daily.

As an adjunct in the treatment of hyperthyroidism metoprolol tartrate may be given in doses of 50 mg four times daily by mouth. Doses of 100 to 200 mg are given daily in divided doses for migraine prophylaxis.

Adverse effects
The following events have been reported as adverse events in clinical trials or reported from routine use.

Metoprolol tablets should be used with caution in patients with impaired hepatic function. In patients with pheochromocytoma, an alpha-blocking agent should be initiated prior to the use of any beta-blocking agent.Following abrupt cessation of therapy with certain beta-blocking agents, exacerbations of angina pectoris and, in some cases, myocardial infarction have occurred. dosage should be gradually reduced over a period of 1 to 2 weeks and the patient should be carefully monitored. Because of its relative beta1-selectivity, however, metoprolol tablets may be used with caution in patients with bronchospastic disease who do not respond to, or cannot tolerate, other antihypertensive treatment. Since beta1-selectivity is not absolute, a beta2-stimulating agent should be administered concomitantly and the lowest possible dose of metoprolol tablets should be used.The necessity or desirability of withdrawing beta-blocking therapy prior to major surgery is controversial; the impaired ability of the heart to respond to reflex adrenergic stimuli may augment the risks of general anesthesia and surgical procedures.Metoprolol tartrate extended-release tablets should be used with caution in diabetic patients if a beta-blocking agent is required. Beta-blockers may mask tachycardia occurring with hypoglycemia, but other manifestations such as dizziness and sweating may not be significantly affected.Beta-adrenergic blockade may mask certain clinical signs (e.g., tachycardia) of hyperthyroidism. Patients suspected of developing thyrotoxicosis should be managed carefully to avoid abrupt withdrawal of beta-blockade, which might precipitate a thyroid storm. Beta-blockers can precipitate or aggravate symptoms of arterial insufficiency in patients with peripheral vascular disease. If a dose should be missed, the patient should take only the next scheduled dose (without doubling it). Patients should not interrupt or discontinue metoprolol tablets without consulting the physician. Patients should contact the physician if any difficulty in breathing occurs; Heart failure patients should be advised to consult their physician if they experience signs or symptoms of worsening heart failure such as weight gain or increasing shortness of breath. Clinical laboratory findings may include elevated levels of serum transaminase, alkaline phosphatase, and lactate dehydrogenase.

Patients with rare hereditary problems of galactose intolerance, the Lapp lactase deficiency or glucose-galactose malabsorption should not take this medicine.

Action on ability to drive and control the mechanisms
Avoid operating automobiles and machinery or engaging in other tasks requiring alertness until the patient’s response to therapy with metoprolol tablets has been determined.

Gastric leveage, adsorbents and symptomatic therapy are a first common measurements in case of overdosage. In acute cases beta- adrenostimulation through i/v injection is necessary ( with the 2-5 min intervals) or 0.5-2 mg atropine sulphate. If conditions are same as before, dopamine, dobutamin or norepinefrin may be used. Then, if symptoms of overdosage persist the 1to10mg glucagons and transvenous intracardial stimulation can be indicated. In case of bronchospasm – i/v injection of beta 2 adrenostimulator is useful, when cramps – the slow infusion of diazepam. Metoprolol has a very poor elimination during the dialysis.

Safety and effectiveness of metoprolol tartrate have not been established in patients less 6 years of age.

Several studies indicate that age-related physiological changes have negligible effects on the pharmacokinetics of metoprolol. There are no notable differences in efficacy or the rate of adverse events between older and younger patients. In general, dose selection for an elderly patient should be cautious, usually starting at the low end of the dosing range, reflecting greater frequency of decreased hepatic, renal or cardiac function and of concomitant disease or other drug therapy.

Category C.The clearance of metoprolol was increased fourfold in 5 pregnant women during the last trimester, compared with that some months after delivery; this was probably due to enhanced hepatic metabolism in the pregnant state. The disposition of metoprolol was investigated in newborn infants of mothers treated with metoprolol 50 to 100 mg twice daily. In 15 of the 17 neonates plasma-metoprolol concentrations increased in the first 2 to 5 hours of the postnatal period, then declined over the next 15 hours; 5 of these infants had no detectable metoprolol concentrations in the umbilical plasma. No infant showed signs of beta blockade.

Metoprolol is distributed into breast milk and studies have shown that the concentration in milk is higher than that in plasma. However, the amount ingested by an infant is likely to be small. No adverse effects have been reported in breast-fed infants whose mothers were receiving metoprolol and the American Academy of Pediatrics although considers that it is usually compatible with breast feeding, howevercaution should be exercised when metoprolol tablets are administered to a nursing woman.

The interactions associated with beta blockers are discussed on Metoprolol tablets, like other beta-blockers, is a competitive inhibitor of beta-receptor agonists, and its effects can be reversed by administration of such agents, e.g., dobutamine or isoproterenol. However, such patients may be subject to protracted severe hypotension.

Catecholamine-depleting drugs [e.g., reserpine, mono amine oxidase (MAO) inhibitors] may have an additive effect when given with beta-blocking agents. Patients treated with metoprolol tablets plus a catecholamine depletor should therefore be closely observed for evidence of hypotension or marked bradycardia, which may produce vertigo, syncope, or postural hypotension.

Both digitalis glycosides, and beta-blockers slow atrioventricular conduction and decrease heart rate. Concomitant use can increase the risk of bradycardia.

3 blisters (1 blister packet with 10 tablets) with leaflet inserted in the cardboard box.