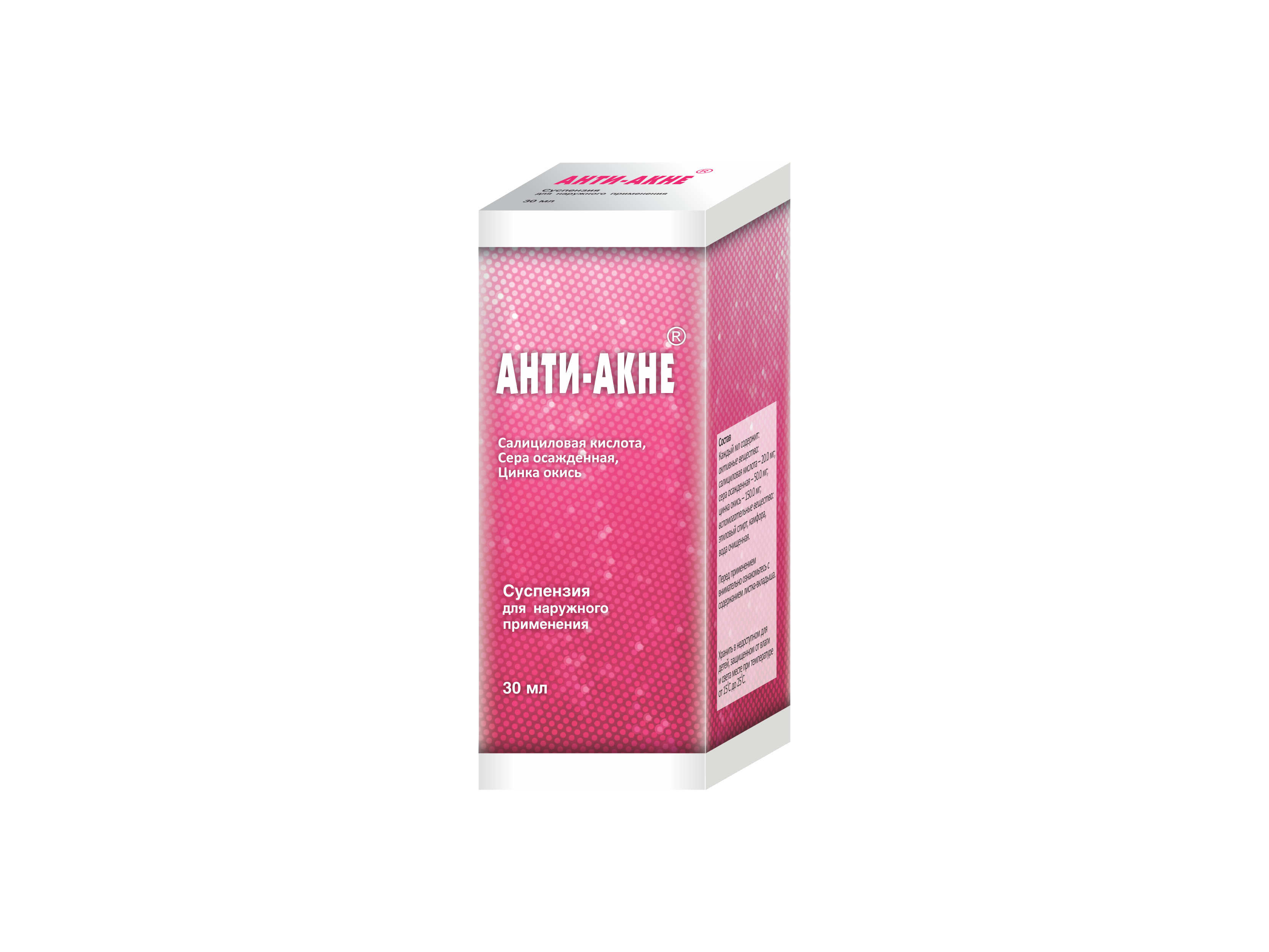 ATC categoryAgents for topical use. Dermatology

Each ml of Anti-Acne, suspension, contains:

Salicylic acid has a potent keratolytic action and a slight antiseptic action when applied topically to the skin. In low concentrations, the drug has keratoplastic activity (correction of abnormal keratinization) and in higher concentrations (i.e., 1% or higher, depending on the vehicle), the drug has keratolytic activity (causes peeling of skin). Salicylic acid softens and destroys the stratum corneum by increasing endogenous hydration (water concentration), probably because of decreased pH, which causes the cornified epithelium (horny layer) of the skin to swell, soften, and then desquamate. Necrosis of normal skin has been associated with overuse of the drug. At high concentrations (e.g., 20%), Salicylic acid has a caustic effect. Moisture is essential for Salicylic acid to exert its action on the skin and for maceration and desquamation of epidermal tissue to occur. The drug has weak antifungal and antibacterial activity. When combined, Salicylic acid and sulfur may produce a synergistic keratolytic effect.

Topically applied sulfur is a keratolytic agent. Sulfur has keratoplastic activity at low concentrations, correcting abnormal keratinization, and keratolytic activity at high concentrations, causing peeling of skin; these effects apparently result from the same action of the drug. Although the mechanism of sulfur’s keratolytic action has not been determined, this action may depend on formation of hydrogen sulfide when the drug comes in contact with skin; the production of the characteristic odor of rotten eggs when sulfur comes in contact with skin results from hydrogen sulfide formation. Hydrogen sulfide may be formed within the epidermis by sulfur reacting with cysteine.

Topically applied sulfur has mild antifungal and antibacterial activity. It has been suggested that when applied topically to the skin, sulfur forms hydrogen sulfide and/or polythionic acid, which may exert germicidal activity. Therefore, sulfur’s antifungal activity probably results largely from its keratolytic action, causing shedding of fungal spores and hyphae embedded within the stratum corneum. The exact mechanism(s) of action of sulfur in the treatment of acne is not fully understood but is presumed to involve the drug’s keratolytic and antibacterial effects. Although some studies indicate that sulfur may also be comedogenic, other studies have been unable to substantiate this effect and the drug generally is considered effective in the topical treatment of acne.

Anti-Acne is applied topically for the treatment of acne vulgaris. The frequency with which Anti-Acne is applied should be determined by the severity of the acne and patient response. Generally, Anti-Acne intended to be applied and left on the skin are applied to thoroughly cleansed skin, covering the entire affected area with a thin layer of the preparation 1–3 times daily or as directed by a physician. To avoid excessive drying, therapy generally is initiated with a single application daily and then the frequency is increased gradually if necessary.

Salicylic acidSalicylic acid is a mild irritant and application of salicylic acid preparations to the skin may cause dermatitis. It is readily absorbed through the skin and symptoms of acute systemic salicylate poisoning have been reported after excessive use; deaths have occurred, mainly in children.

When used in appropriate dosage, topically applied Sulfur preparations have a low order of toxicity. Topical preparations containing 5% Sulfur generally are well tolerated. Local irritation of the skin, eyes, or respiratory tract may occur and, therefore, contact with eyes should be avoided. Allergic reactions to sulfur occur rarely. Repeated applications may cause dermatitis, sometimes severe.

There have been no reports of systemic toxicity to date following topical application of preparations containing 5% Sulfur, and such concentrations are generally considered safe for topical use.

There have been no side effects reported with topical zinc oxide.

Anti-Acne is contraindicated in patients with hypersensitivity to ingredients of preparation.To minimise absorption after topical application salicylic acid should not be used for prolonged periods, in high concentrations, on large areas of the body, or on inflamed or broken skin. Contact with mouth, eyes, and other mucous membranes should be avoided; if contact with the eyes occurs, the affected eyes should be rinsed thoroughly with water. It should also be used with care on the extremities of patients with impaired peripheral circulation or diabetes; caution has also been suggested for the use of caustic preparations in patients with significant peripheral neuropathy.

Contact with sulfur can discolour certain metals such as silver, and application of sulfur with topical mercurial compounds can lead to the generation of hydrogen sulfide which has a foul odor and may stain the skin black.

If excessive skin irritation develops or increases during self-medication with a Anti-Acne, the drug should be discontinued and physician or pharmacist consulted.

When used for self-medication of acne, Anti-Acne generally should not be used concurrently with other topical acne medications unless otherwise directed by a physician.

Anti-Acne should not be used in children younger than 12 years of age.

It should be avoided to use Anti-acne in pregnancy and breast feeding.

Anti-Acne, suspension is supplied in a amber glass botlle (30 ml).