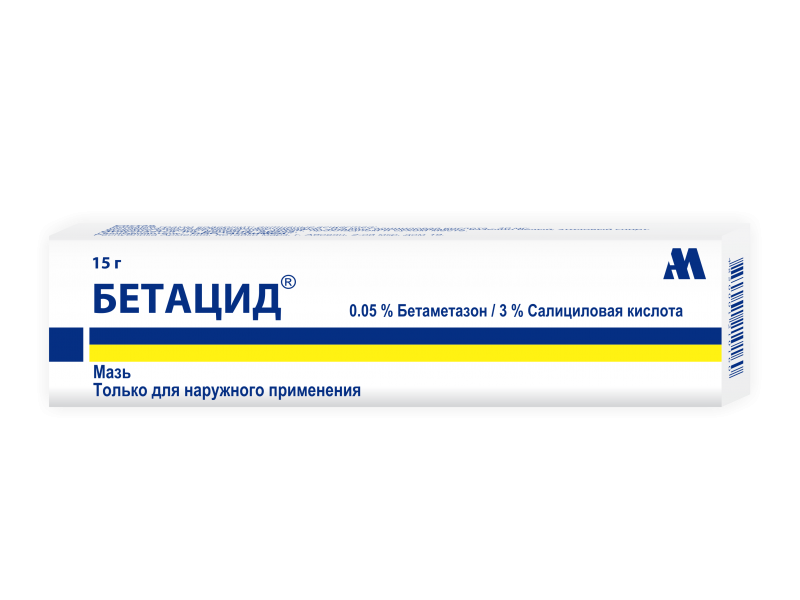 ATC subcategoryGlucocorticoids for external use

Betacid contains combinations of salicylic acid, а keratolytic agent, and betamethasone, a corticosteroid, for dermatologic use.

Salicylic acid has a potent keratolytic action and a slight antiseptic action when applied topically to the skin. In low concentrations, the drug has keratoplastic activity (correction of abnormal keratinization) and in higher concentrations (i.e., 1% or higher, depending on the vehicle), the drug has keratolytic activity (causes peeling of skin). Salicylic acid softens and destroys the stratum corneum by increasing endogenous hydration (water concentration), probably because of decreased pH, which causes the cornified epithelium (horny layer) of the skin to swell, soften, and then desquamate. Necrosis of normal skin has been associated with overuse of the drug. At high concentrations (e.g., 20%), Salicylic acid has a caustic effect. Moisture is essential for Salicylic acid to exert its action on the skin and for maceration and desquamation of epidermal tissue to occur. The drug has weak antifungal and antibacterial activity. When combined, Salicylic acid and sulfur may produce a synergistic keratolytic effect.

Percutaneous penetration of Betamethasone varies among individual patients and can be increased by the use of occlusive dressings, by increasing the concentration of the corticosteroid, and by using different vehicles. Betamethasone apparently does not penetrate the dermis to a greater extent than does hydrocortisone. Following topical application of a Betamethasone to most areas of normal skin, only minimal amounts of the drug reach the dermis and subsequently the systemic circulation; however, absorption is markedly increased when the skin has lost its keratin layer and can be increased by inflammation and/or diseases of the epidermal barrier (e.g., psoriasis, eczema). The drug is absorbed to a greater degree from the scrotum, axilla, eyelid, face, and scalp than from the forearm, knee, elbow, palm, and sole. Even after washing the area being treated, prolonged absorption of the Betamethasone occurs, possibly because the drug is retained in the stratum corneum.

Betamethasone usually is metabolized in the liver and excreted by the kidneys.

Betamethasone crosses the placenta to varying degrees and may be distributed in small amounts into breast milk.

A thin film of Betacidshould be applied to cover completely the affected area.

Apply a few drops of Betacidlotion to the affected areas and massage gently and thoroughly into the scalp or skin.

The usual frequency of application is twice daily, in the morning and at night. For some patients, adequate maintenance therapy may be achieved with less frequent application.

Dosage should be limited to 5 days.

Betacid preparations are generally well tolerated and side effects are rare.

Continuous application without interruption may result in local atrophy of the skin, striae and superficial vascular dilation, particularly on the face.

Adverse reactions that have been reported with the use of topical corticosteroids include: burning, itching, dryness, folliculitis, hypertrichosis, acneiform eruptions, hypopigmentation, perioral dermatitis, allergic contact dermatitis.

The following may occur more frequently with the use of occlusive dressings: maceration of the skin, secondary infection, skin atrophy, striae and miliaria.

Salicylic acid preparations may cause dermatitis.

Symptoms: excessive or prolonged use of topical corticosteroids can suppress pituitary-adrenal function, resulting in secondary adrenal insufficiency and produce manifestations of hypercorticism, including Cushing’s disease.

Excessive or prolonged use of topical preparations containing salicylic acid may cause symptoms of salicylism.

Treatment of salicylism is symptomatic treatment is indicated. Measured should be taken to rid the body rapidly of salicylate. Administer oral sodium bicarbonate to alkalinize the urine and force diuresis.

Precautions
To minimise absorption after topical application salicylic acid should not be used for prolonged periods, in high concentrations, on large areas of the body, or on inflamed or broken skin.

Contact with mouth, eyes, and other mucous membranes should be avoided; if contact with the eyes occurs, the affected eyes should be rinsed thoroughly with water. It should also be used with care on the extremities of patients with impaired peripheral circulation or diabetes; caution has also been suggested for the use of caustic preparations in patients with significant peripheral neuropathy.

If irritation or sensitization occurs following topical application of Betacid, the drug should be discontinued. Use of Betacid in the treatment of diaper dermatitis is not recommended.

15 g of ointment is filled into aluminum tubes (inside package).
The tubes are packed and inserted with the leaflet into cardboard boxes (outer package)

Store in a cool and dry place, out of the reach of children. Protect from light.