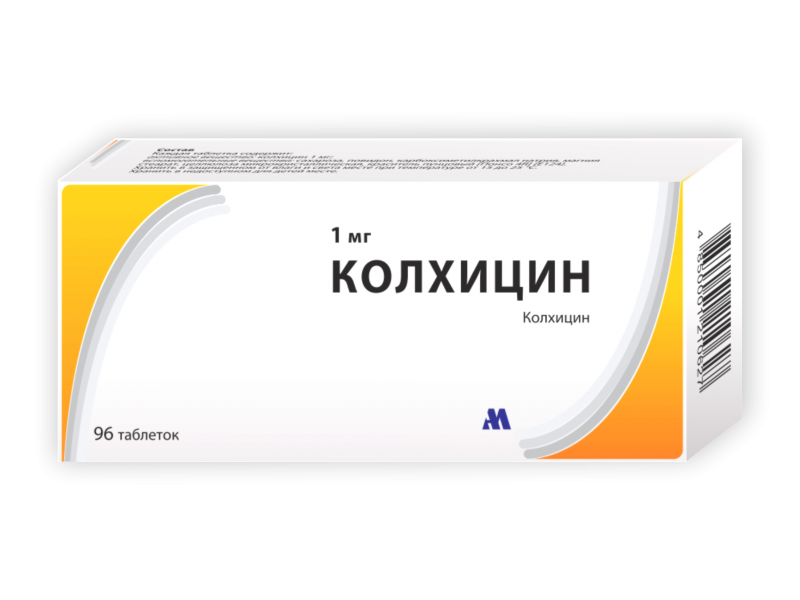 Colchicine 1 mg tablets: a pink, round, scored on one side, white and darkish pink mottled tablet with beveled edges.

Posology and method of administration

2 to 3 times daily 0.5 mg, possibly preceded by an initial dose of 1 mg. Treatment should end until the acute attack resolves, or earlier in the event of gastrointestinal symptoms and no improvement after 2 to 3 days. No more than 6 mg should be taken as a course of treatment. After completion of a course, another course should not be started for at least 3 days (72 hours). If diarrhoea or vomiting occurs, Colchicine 1000 microgram Tablets should be discontinued immediately as these may be the first signs of an intoxication.

Colchicine should not be used in children and adolescents.

Concomitant treatment of colchicine with several drugs, mostly inhibitors of cytochrome P450 3A4 (CYP3A4)/P-glycoprotein have been shown to increase the risk for colchicine toxicity. If a patient has received concomitant therapy with a moderate or potent CYP3A4 inhibitor or with a P-glycoprotein inhibitor, the maximum recommended dosage of oral colchicine should be reduced and should be carefully monitored for adverse effects of colchicine.

The dose may be given as a single dose or doses higher than 1 mg/day may be divided and given twice daily.

Colchicine dosage should be increased in a stepwise fashion up to a maximum of 3 mg/day to control disease in patients who do not clinically respond to the standard dosage. Any increase of the daily dose should be monitored closely for adverse effects. Careful monitoring is needed in the presence of impaired renal or liver function. For these patients, the starting dose should be reduced by 50% (e.g. ≤ 1mg/day).

For paediatric use, colchicine should only be prescribed under the supervision of a medical specialist with the necessary knowledge and experience.

A starting dose should be administered orally based on age:

In children with amyloid nephropathy, higher daily doses up to 2 mg/day might be needed. When 0.25mg doses are required, e.g. to control disease in patients who do not clinically respond to the standard dosage, the 0.5 mg and 1 mg tablet are not appropriate.

Concomitant treatment of colchicine with several drugs, mostly inhibitors of cytochrome P450 3A4 (CYP3A4)/P-glycoprotein have been shown to increase the risk for colchicine toxicity. If a patient has received concomitant therapy with a moderate or potent CYP3A4 inhibitor or with a P-glycoprotein inhibitor, the maximum recommended dosage of oral colchicine should be reduced and should be carefully monitored for adverse effects of colchicine.

Tablet should be swallowed with a glass of water.

For children younger than 1 year a colchicine oral solution can be considered.

Contraindications
Special warnings and precautions for use

Colchicine is potentially toxic so it is important not to exceed the dose prescribed by a medical specialist with the necessary knowledge and experience. Colchicine has a narrow therapeutic window. The administration should be discontinued if toxic symptoms such as nausea, vomiting, abdominal pain, diarrhea occur.

If patients develop signs or symptoms that could indicate a blood cell dyscrasia, such as fever, stomatitis, sore throat, or prolonged bleeding, treatment with colchicine should be immediately discontinued and a full haematological investigation should be conducted.

Caution is advised in case of:

Colchicine may cause severe bone marrow depression (agranulocytosis, aplastic anaemia, thrombocytopenia). The change in blood counts may be gradual or very sudden. Aplastic anaemia in particular has a high mortality rate. Periodic checks of the blood count are essential. If skin abnormalities (petechiae) occur, blood counts should be checked immediately.

Macrolides, CYP3A4 inhibitors, ciclosporin, HIV protease inhibitors, calcium channel blockers, and statins may cause clinically significant interactions with colchicine which may lead to colchicine-induced toxicity (see section Interaction with other medicinal products and other forms of interaction).

Co-administration with P-gp inhibitors and/or strong CYP3A4 inhibitors will increase the exposure to colchicine, which may lead to colchicine-induced toxicity including fatalities. If treatment with a P-gp inhibitor or a strong CYP3A4 inhibitor is required in patients with normal renal and or hepatic function, a reduction in colchicine dosage is recommended (see sections Posology and method of administration and Interaction with other medicinal products and other forms of interaction) and patients should be carefully monitored for adverse effects of colchicine.

Long-term use of colchicine may be associated with vitamin B12 deficiency.

No long-term safety data are available in paediatric patients. The use of colchicine in children is primarily indicated for the indication FMF.

Interactions with other drugs are not or scarcely documented. Given the nature of the side effects, caution is advised with concomitant administration of drugs that can affect the blood count or have a negative effect on hepatic and/or renal function.

In addition, substances such as cimetidine and tolbutamide may reduce metabolism of colchicine and thus increase plasma levels of colchicine.

Colchicine is a substrate for both CYP3A4 and the transport protein P-gp. In the presence of CYP3A4 or P-gp inhibitors, the concentrations of colchicine in the blood may increase. Toxicity, including fatal cases, have been reported during concurrent use of inhibitors such as macrolides (clarithromycin and erythromycin), ciclosporin, ketoconazole, itraconazole, voriconazole, HIV protease inhibitors, calcium channel antagonists such as verapamil and diltiazem. It has been reported that co-administration of azithromycin with colchicine leads to increased serum levels of colchicine. During treatment with azithromycin and after discontinuation, clinical follow-up, and potentially follow up of serum levels of colchicine, is required (see section Special warnings and precautions for use).

If treatment with a P-gp inhibitor (e.g. ciclosporin, verapamil or quinidine) or strong CYP3A4 inhibitor (e.g. ritonavir, atazanavir, indinavir, clarithromycin, telithromycin, itraconazole or ketaconazole) is required in patients with normal renal or hepatic function, adjustment of colchicine dosage may be necessary.

Concurrent use of such inhibitors and colchicine should be avoided in patients with renal or hepatic damage (see section Special warnings and precautions for use).

Reversible malabsorption of cyanocobalamine (Vitamin B12) may be induced by an altered function of the intestinal mucosa.

The risk of myopathy and rhabdomyolysis is increased by a combination of colchicine with statins, fibrates, ciclosporin or digoxin.

Animal research has shown that administration of colchicine may negatively influence spermatogenesis (see section Preclinical safety data). Rare cases of reversible oligospermia and azoospermia in men are known from literature.

In case Colchicine is used for treatment of FMF

Since the course of FMF without treatment may also lead to infertility, the use of colchicine should be weighed against the potential risks and may be considered, if clinically needed.

Male patients should not father a child during and for at least 6 months following termination of colchicine therapy (see section Special warnings and precautions for use). If, nevertheless, pregnancy occurs during this time period, genetic counselling should be tasked.

In case colchicine is used for treatment of FMF

A moderate amount of data on pregnant women with FMF indicate no malformative or feto/ neonatal toxicity of colchicine. Since the course of FMF without treatment may also negatively influence pregnancy, the use of colchicine during pregnancy should be weighed against the potential risks and may be considered, if clinically needed.

There is a limited amount of data from the use of colchicine in pregnant women with gout. As a precautionary measure, use of colchicine in this patient population and in women of childbearing potential not using effective contraception, should be avoided and may only be considered if other treatment options, including NSAIDs and glucocorticoids, are not applicable.

Female patients have to use effective contraception during and for at least three months following termination of colchicine therapy (see section Special warnings and precautions for use). If, nevertheless, pregnancy occurs during this time period, genetic counselling should be tasked.

Colchicine/metabolites is /are found in breastfed newborns/infants of treated women. There is insufficient information on the effects of colchicine in newborns/infants. Colchicine should not be used in breast-feeding women with gout. In lactating mothers with FMF, a decision must be made whether to discontinue breast-feeding or to discontinue/abstain from {Invented name} therapy taking into account the benefit of breast feeding for the child and the benefit of therapy for the woman.

No data are available regarding the influence of colchicine on the ability to drive and use machines. However, the possibility of drowsiness and dizziness should be taken into account.

The following adverse reactions have been observed.

The frequencies are unknown, unless listed under one of the following classifications: Very common (≥ 1/10)

No long-term safety data are available in paediatric patients.

Reporting suspected adverse reactions after authorisation of the medicinal product is important. It allows continued monitoring of the benefit/risk balance of the medicinal product. Healthcare professionals are asked to report any suspected adverse reactions via Arpimed “LLC” by going to www.arpimed.com and fill out the appropriate form ″Report an adverse reaction or inefficiency of drug″. Hotline number: (+374 55) 05 79 86. And by using Scientific Centre of Drug and Medical Technology Expertise after academician E. Gabrielyan ″CJSC″, going to the site: www.pharm.am in ″Report about adverse effect of medicine″ section and fill out the ″Report of adverse reaction or manufacturing problem of medicinal product″. Hotline numbers: +37410200505; +37496220505.

Colchicine has a narrow therapeutic window and is extremely toxic in overdose. Patients at particular risk of toxicity are those with renal or hepatic impairment, gastro-intestinal or cardiac disease and patients at extremes of age. Following colchicine overdose, all patients, even in the absence of early symptoms should be referred for immediate medical assessment.

No antidote is available.

Elimination of toxins by gastric lavage within one hour of acute poisoning.

Symptomatic and supportive treatment: control of respiration, maintenance of blood pressure and circulation, correction of fluid and electrolytes imbalance.

The lethal dose varies strongly (7 – 65 mg in one dose), but for adults it is generally about 20 mg.

Drugs for gout, with no effect on uric acid metabolism.

The mechanism of action of colchicine in the treatment of gout is not completely known. Urate crystals are phagocytosed by leukocytes. Hereby inflammatory factors are released. Colchicine inhibits these processes. Other properties of colchicine, such as interaction with microtubules, could also contribute to its action.

Onset of actions is approximately 12 hours after oral administration and is maximal after 1 to 2 days.

Colchicine is rapidly and almost completely absorbed after oral administration. Maximum plasma concentrations are met usually after 30 to 120 minutes.

Plasma protein binding of colchicine is approximately 30%. It accumulates in leucocytes.

Colchicine is partially metabolized in the liver and then then in part via the bile. It is largely excreted (80%) in unchanged form and as metabolites in the faeces. 10-20% is excreted in urine. The plasma half-life is 30-60 minutes and approximately 60 hours in leukocytes.

No pharmacokinetics data are available in children.

Colchicine causes DNA damage in vitro and chromosomal aberrations were observed in vivo. No toxicity data are available from own preclinical research.

Studies in animals have shown that colchicine-induced disruption op microtubule formation has an effect on meiosis and mitosis. After colchicine exposure a reduced sperm count and sperm cells with abnormal morphology have been demonstrated in male animals. The doses used in these studies were substantially higher than the dose prescribed for use in patients. High doses of colchicine can cause teratogenicity and embryo toxicity in mice, rats and rabbits.

Store at temperature not higher than 250C, in a dry place, and protect from light. Keep out of the reach of children.

Nature and contents of container

24 tablets are packed into PVC-Alu blister packet (inside package)

4 blisters are packed with 24 tablets in each are inserted together with the leaflet into cardboard boxes (outer package).