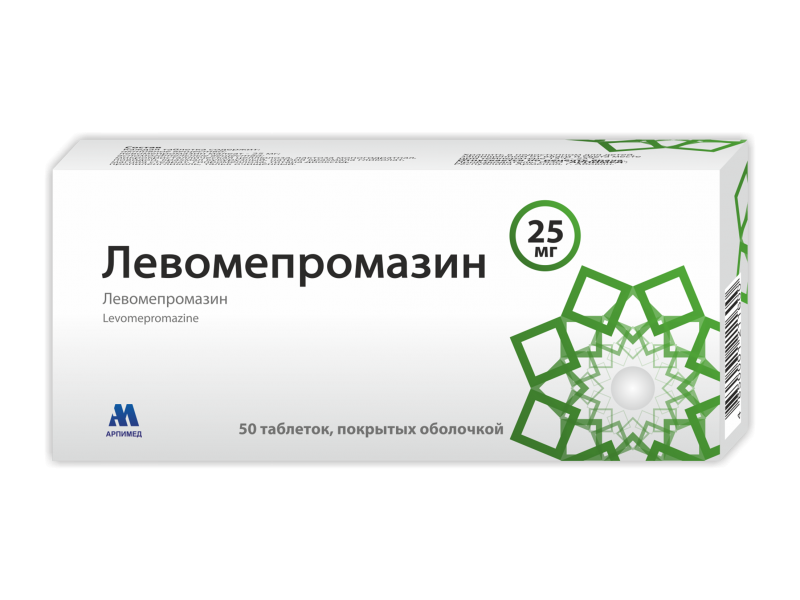 Composition
Each coated tablet of Levomepromazine, 25 mg contains:
active ingredient: Levomepromazine maleate- 25 mg;
excipients: tablet core: microcrystalline cellulose, lactose monohydrate, povidone, maize starch, sodium starch glycolate, magnesium stearate, sodium starch glycolate; tablet coating: hypromellose, titanium dioxide, propylene glycol, talc purified.
Pharmacological group and ATC code
Antipsychotics. ATC code: NO5AA02
Chemical name and CAS number
(2R)-3-(2-Methoxyphenothiazine-10-yl-)-N,N,2-trimethylpropan-1-amine(Z)-butenedioate; 7104-38-3
Pharmacology
Levomepromazine resembles chlorpromazine and promethazine in the pattern of its pharmacology. It possesses anti-emetic, antihistamine and anti-adrenaline activity and exhibits a strong sedative effect.
Pharmacokinetics
Maximum serum concentrations are achieved in 2 to 3 hours depending on the route of administration. Excretion is slow, with a half-life of about 30 hours. It is eliminated via urine and faeces.
Uses
Levomepromazine is a neuroleptic with indications in psychiatry and general medicine, particularly in terminal illness. Clinically it is more sedative and more potent than chlorpromazine in the management of psychotic conditions and in the relief of severe chronic pain.
Psychiatry
As an alternative to chlorpromazine in schizophrenia especially when it is desirable to reduce psychomotor activity.
General medicine – Terminal illness
Adjunct therapy in the relief of pain and the accompanying distress.
Dosage and administration
Dosage varies with the condition under treatment and the individual response of the patient.
1. Terminal illness
Levomepromazine tablets 25mg may be substituted for the injection if oral therapy is more convenient, the dosage being 12.5mg to 50mg every 4 to 8 hours.
Elderly
No specific dosage recommendations.
2. Psychiatric conditions
Adults
Ambulant patients: initially the total daily oral dose should not exceed 25mg to 50mg usually divided into 3 doses; a larger portion of the dosage may be taken at bedtime to minimise diurnal sedation. The dosage is then gradually increased to the most effective level compatible with sedation and other side effects. Bed patients: initially the total daily oral dosage may be 100mg to 200mg, usually divided into 3 doses, gradually increased to 1g daily if necessary. When the patient is stable attempts should be made to reduce the dosage to an adequate maintenance level.
Children
Children are very susceptible to the hypotensive and soporific effects of levomepromazine. It is advised that a total daily oral dosage of 1½ tablets should not be exceeded. The average effective daily intake for a ten year old is ½ to 1 tablet.
Elderly patients
It is not advised to give levomepromazine to ambulant patients over 50 years of age unless the risk of a hypotensive reaction has been assessed.
Adverse effects
Somnolence and asthenia are frequent side effects. Dry mouth is encountered occasionally. Hypotension may occur, especially in elderly patients. A raised ESR may occasionally be encountered. Agranulocytosis has been reported, as have photosensitivity and allergic skin reactions. Parkinsonian-like reactions may occur in patients receiving prolonged high dosage. Jaundice is a rare side effect. Other adverse effects common to phenothiazine neuroleptics may be seen, such as heat stroke in hot and humid conditions, constipation that may become severe leading to paralytic ileus, neuroleptic malignant syndrome and rare cases of cardiac rhythm disturbances and prolongation of the QT interval. In common with other antipsychotics, there is a potential risk of QT prolongation with Levomepromazine which may rarely result in precipitation of ventricular arrhythmias such as ventricular tachycardia or fibrillation, cardiac arrest. There have been isolated reports of sudden death, with possible causes of cardiac origin , as well as cases of unexplained sudden death, in patients receiving neuroleptic phenothiazines. Very rarely cases of Torsades de Pointes have been reported, treatment of which should include discontinuation of levomepromazine and correction of hypoxia, electrolyte abnormalities and acid base disturbances. Necrotizing enterocolitis which can be fatal, has been very rarely reported in patients treated with levomepromazine. Priapism has also been very rarely reported. Cases of venous thromboembolism, including cases of pulmonary embolism and cases of deep vein thrombosis have been reported with antipsychotic drugs- Frequency unknown Intolerance to glucose, hyperglycaemia.
Overdosage
Symptoms of levomepromazine overdosage include drowsiness or loss of consciousness, hypotension, tachycardia, ECG changes, ventricular arrhythmias and hypothermia. Severe extrapyramidal dyskinesias may occur. If the patient is seen sufficiently soon (up to 6 hours) after ingestion of a toxic dose, gastric lavage may be attempted. Pharmacological induction of emesis is unlikely to be of any use. Activated charcoal should be given. There is no specific antidote. Treatment is supportive. Generalised vasodilatation may result in circulatory collapse; raising the patient’s legs may suffice but, in severe cases, volume expansion by intravenous fluids may be needed; infusion fluids should be warmed before administration in order not to aggravate hypothermia. Positive inotropic agents such as dopamine may be tried if fluid replacement is insufficient to correct the circulatory collapse. Peripheral vasoconstrictor agents are not generally recommended; avoid use of adrenaline (epinephrine). Ventricular or supraventricular tachy-arrhythmias usually respond to restoration of normal body temperature and correction of circulatory or metabolic disturbances. If persistent or life-threatening, appropriate anti-arrhythmic therapy may be considered. Avoid lidocaine (lignocaine) and, as far as possible, long acting anti-arrhythmic drugs. Pronounced central nervous system depression requires airway maintenance or, in extreme circumstances, assisted respiration. Severe dystonic reactions usually respond to procyclidine (5mg to 10mg) or orphenadrine (20mg to 40mg) administered intramuscularly or intravenously. Convulsions should be treated with intravenous diazepam. Neuroleptic malignant syndrome should be treated with cooling. Dantrolene sodium may be tried.
Contraindications
Safety in pregnancy has not been established. There are no absolute contraindications to the use of Levomepromazine in terminal care.
Precautions
The drug should be avoided, or used with caution, in patients with liver dysfunction or cardiac disease. The hypotensive effects of Levomepromazine should be taken into account when it is administered to patients with cardiac disease and the elderly or debilitated. Patients receiving large initial doses should be kept in bed. As with other neuroleptics, cases of QT interval prolongation have been reported with levomepromazine very rarely. Consequently, and if the clinical situation permits, absence of the following risk factors for onset of this type of arrhythmia should be verified prior to administration:

Prior to initiation of treatment with levomepromazine, it may be appropriate to consider an ECG with measurement of serum calcium, magnesium and potassium levels. Periodic serum electrolyte levels should be monitored and corrected if necessary, especially during long-term chronic usage. An ECG may be appropriate to assess the QT interval whenever dose escalation is proposed and when the maximum therapeutic dose is reached.

Stroke:
In randomized clinical trials versus placebo performed in a population of elderly patients with dementia and treated with certain atypical antipsychotic drugs, a 3-fold increase of the risk of cerebrovascular events has been observed. The mechanism for this increased risk is not known. An increased risk cannot be excluded for other antipsychotics or other patient populations. Levomepromazine should be used with caution in patients with risk factors for stroke.

Increased Mortality in Elderly people with Dementia
Data from two large observational studies showed that elderly people with dementia who are treated with conventional (Typical) antipsychotics are at a small increased risk of death compared with those who are not treated. There are insufficient data to give a firm estimate of the precise magnitude of the risk and the cause of the increased risk is not known. Levomepromazine is not licensed for the treatment of dementia-related behavioural disturbances.

Venous thromboembolism:
Cases of venous thromboembolism (VTE) have been reported with antipsychotic drugs. Since patients treated with antipsychotics often present with acquired risk factors for VTE, all possible risk factors for VTE should be identified before and during treatment with Nozinan and preventive measures undertaken.

Hyperglycaemia
Hyperglycaemia or intolerance to glucose has been reported in patients treated with Nozinan. Patients with an established diagnosis of diabetes mellitus or with risk factors for the development of diabetes who are started on Levomepromazine, should get appropriate glycaemic monitoring during treatment .

Pregnancy and breastfeeding
Safety in pregnancy has not been established.
Drug interactions
Cytochrome P450 2D6 Metabolism: Levomepromazine and its non-hydroxylated metabolites are reported to be potent inhibitors of cytochrome P450 2D6. Co-administration of levomepromazine and drugs primarily metabolised by the cytochrome P450 2D6 enzyme system may result in increased plasma concentrations of the drugs that could increase or prolong both therapeutic or adverse effects of those drugs. There is an increased risk of arrhythmias when neuroleptics are used with drugs that prolong the QT interval such as certain class 1A and III antiarrhythmics (such as quinidine, disopyramide, procainamide, amiodarone, sotalol and dofetilide), certain antimicrobials (such as sparfloxacin, moxifloxacin and erythromycin IV), tricyclic antidepressants (e.g. amitriptyline), tetracyclic antidepressants (e.g. maprotiline), other neuroleptics (e.g. phenothiazines, pimozide and sertindole), antihistamines (e.g. terfenadine), cisapride, bretylium and antimalarials (e.g. quinine and mefloquine). The anticholinergic effect of neuroleptics may be enhanced by other anticholinergic drugs. Avoid concomitant neuroleptics and any other drugs that may cause electrolyte imbalance. Diuretics, in particular those causing hypokalemia, should be avoided but, if necessary, potassium-sparing diuretics are preferred. Simultaneous administration of desferrioxamine and prochlorperazine has been observed to induce a transient metabolic encephalopathy, characterised by loss of consciousness for 48 to 72 hours. It is possible that this may occur with Levomepromazine since it shares many of the pharmacological activities of prochlorperazine. Adrenaline (epinephrine) must not be used in patients overdosed with neuroleptics. Alcohol should be avoided.
Presentation
5 blisters (1 blister packet with 10 tablets) with leaflets in the cardboard box.
Expiry date
3 years. Do not use after the expiration date.
Prescription status
To be dispensed with prescription.
Storage conditions
Store at a room temperature (15-250C), in a dry place, out of the reach of children. Protect from light.