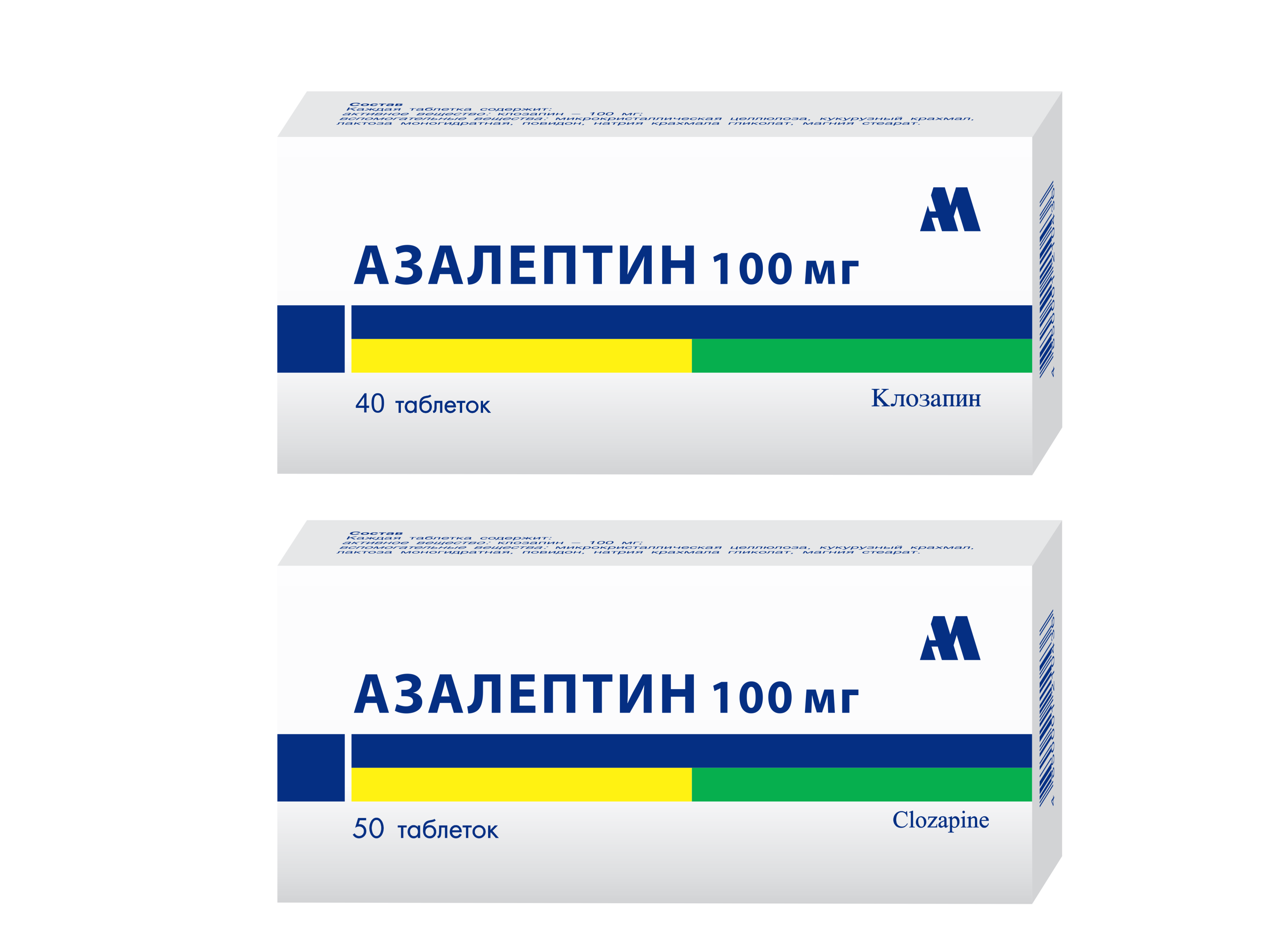 Clozapine is a dibenzodiazepine derivative and the prototype of the atypical antipsychotics. It has relatively weak dopamine receptor-blocking activity at D1, D2, D3, and D5 receptors but has a high affinity for the D4 receptor. Clozapine possesses alpha-adrenergic blocking, antimuscarinic, antihistaminic, antiserotonergic, and sedative properties.

Although clozapine is well absorbed from the gastrointestinal tract, its bioavailability is limited to about 50% by first-pass metabolism. Peak plasma concentrations are achieved, on average, about 2.5 hours after oral doses. Clozapine is about 95% bound to plasma proteins and has a mean terminal elimination half-life of about 12 hours at steady state. It is almost completely metabolised and routes of metabolism include N-demethylation, hydroxylation, and N-oxidation; the desmethyl metabolite (norclozapine) has limited activity. The metabolism of clozapine is mediated mainly by the cytochrome P450 isoenzyme CYP1A2. Metabolites and trace amounts of unchanged drug are excreted mainly in the urine and also in the faeces. There is wide interindividual variation in plasma concentrations of clozapine and no simple correlation has been found between plasma concentrations and therapeutic effect. It is distributed into breast milk.

Uses and administration
Clozapine is used for the management of schizophrenia; however, because of the risk of agranulocytosis, it is reserved for patients who fail to respond to other antipsychotics, including other atypicals, or who experience severe neurological effects with such drugs.

Clozapine use must be accompanied by strict procedures for the monitoring of white blood cell counts. To minimise the incidence of adverse effects, clozapine therapy should be introduced gradually, beginning with low doses and increasing according to response.

In the treatment of schizophrenia, including reducing the risk of suicidal behaviour, the usual dose by mouth is 12.5 mg once or twice on the first day followed by 25 mg once or twice on the second day. Thereafter the daily dosage may be increased gradually in increments of 25 to 50 mg to achieve a daily dose of up to 300 mg within 14 to 21 days. Subsequent increments of 50 to 100 mg may be made once or twice weekly; a daily dosage of 900 mg should not be exceeded. Once a therapeutic response has been obtained, a gradual reduction of dosage to a suitable maintenance dose is recommended; most patients respond to 200 to 450 mg daily. The total daily dose is given in divided doses; a larger portion may be given at night. Daily maintenance doses of 200 mg or less may be given as a single dose in the evening. If clozapine is to be withdrawn, this should be done gradually over a 1- to 2-week period. However, immediate withdrawal with careful observation is essential if neutropenia develops or if myocarditis or cardiomyopathy is suspected.

Elderly patients may require lower doses of clozapine and it is recommended that treatment should start with a dose of 12.5 mg on the first day and that subsequent dose increments should be restricted to 25 mg.

For patients who are restarting treatment after an interval of more than 2 days, 12.5 mg may be given once or twice on the first day. If this dose is well tolerated it may be possible to increase the dosage more quickly than when first starting. However, patients who have had respiratory or cardiac arrest with initial dosing, but were then successfully titrated to a therapeutic dose, should be re-titrated with extreme caution after a break of even 24 hours.

It is recommended that oral therapy with other antipsychotics should be withdrawn gradually before treatment with clozapine is started.

Adverse effects
Cardio-vascular system: tachycardia, arterial hypotension, orthostatic hypotension accompanied by dizziness; rarely – arterial hypertension. In rare cases, a collapse can happen, accompanied by inhibition or cessation of breathing. There are some reports about the changes on the ECG, the development of arrhythmias, myocarditis, pericarditis and cardiomyopathy.

Digestive system: hypersalivation, nausea, vomiting, unpleasant abdominal feeling, heartburn,constipation (which, in a few cases, has led to gastrointestinal obstruction, faecal impaction, and paralytic ileus. There were reports of liver enzymes activity increase and in rare cases of cholestasis.

The respiratory system: pneumonia and lower respiratory tract infection, which can have fatal consequences.

Effects due to anticholinergic activity: can be – dry mouth, accommodation disturbances,constipation, disorders of urination,sweating and thermoregulation, the development of hyperthermia.

Others – urinary incontinence and retention, transient fever, dysphagia, parotid gland enlargement, confusion, delirium, thromboembolism, acute pancreatitis, hepatitis and cholestatic jaundice, and very rarely fulminant hepatic necrosis. Isolated cases of acute interstitial nephritis have been reported. Abnormalities of glucose homoeostasis and the onset of diabetes mellitus occur uncommonly; severe hyperglycaemia, sometimes leading to ketoacidosis or hyperosmolar coma, has been reported very rarely. There have also been rare reports of hypercholesterolaemia and hypertriglyceridaemia. Many of the adverse effects of clozapine are most common at the start of therapy and may be minimised by gradual increase in dosage.

In general, overdosage of clozapine may be expected to produce effects that are extensions of pharmacologic and adverse effects.

It is recommended establishing and maintaining an airway and ensuring adequate ventilation and oxygenation. Activated charcoal, which may be used with sorbitol, may be as or more effective than emesis or gastric lavage and should be considered in the treatment of clozapine overdosage. Electrolyte and acid-base balance should be monitored and adjusted accordingly. Peritoneal dialysis or hemodialysis is of limited value in the treatment of clozapine overdosage because the drug is almost totally bound to serum protein. Forced diuresis, hemoperfusion, and exchange transfusion also are unlikely to be of benefit. While physostigmine salicylate may be useful as adjunctive treatment if severe anticholinergic toxicity is present, the drug should not be used routinely because of its potential adverse effects.

Epinephrine should not be used for treating clozapine-induced hypotension, since clozapine can reverse epinephrine’s vasopressor effects and cause a further lowering of blood pressure. Because of potential additive anticholinergic effects, quinidine or procainamide should be avoided when treating clozapine-induced arrhythmias. Surveillance of the patient should be continued for several days following overdosage because of the risk of delayed effects. In managing clozapine overdosage, the clinician should consider the possibility of multiple drug involvement.

Clozapine is contra-indicated in patients with severe renal impairment; caution is required in mild to moderate renal impairment. It should be used with caution in hepatic impairment and avoided in symptomatic or progressive liver disease or hepatic failure. Patients with a history of cardiac impairment or abnormal cardiac findings on examination should be referred to a specialist for further evaluation, which may include an ECG; treatment with clozapine should only then be started if the potential benefits clearly outweigh any risk. Clozapine should not be used in severe heart failure.

Monitoring of leukocytes carried out once in a week during the first 18 weeks of treatment. Then, at least, once every two weeks during the first year of treatment.If the number of neutrophils is stable, monitoring of the number of leukocytes may be carried out once in every 4 weeks.If the white blood cells count is less than 3000/mm3 and / or absolute count of neutrophil / granulocytes is less than 1500/mm3, Azaleptin should be immediately removed and install a careful observation of the patient.

Clozapine possesses antimuscarinic properties and consequently it is contra-indicated in patients with paralytic ileus; it should also be used with caution in benign prostatic hyperplasia and angle-closure glaucoma.

Clinical monitoring for hyperglycaemia has been recommended, especially in patients with or at risk of developing diabetes.

Monitoring the white blood cell and absolute neutrophil counts is mandatory during clozapine treatment and should be carried out in accordance with official recommendations; these may vary between countries. Patients or their carers should report the development of any infection or signs such as fever, sore throat, or flu-like symptoms which suggest infection.

Patients who develop tachycardia at rest, dyspnoea, arrhythmias, chest pain, or other signs and symptoms of heart failure should be investigated immediately and clozapine treatment stopped if a diagnosis of myocarditis or cardiomyopathy is suspected.

Because of an increased risk of collapse due to orthostatic hypotension associated with rapid dose escalation during initial titration of clozapine dosage, it is recommended that treatment should be begun under close medical supervision. In addition, patients with Parkinson’s disease should have their blood pressure monitored for the first weeks of treatment.

On planned withdrawal, the dose of clozapine should be reduced gradually over at least a 1- to 2-week period in order to avoid the risk of rebound psychosis and other withdrawal symptoms. If abrupt withdrawal is necessary then patients should be observed carefully.

Clozapine may affect the performance of skilled tasks such as driving.

The safety and efficacy of the preparation Azaleptin have not been established for children and adolescents under the age of 16 years.

Contraindication of concomitant use

5 blister packets with 10 tablets in each with insert-leaflet in the cardboard box.