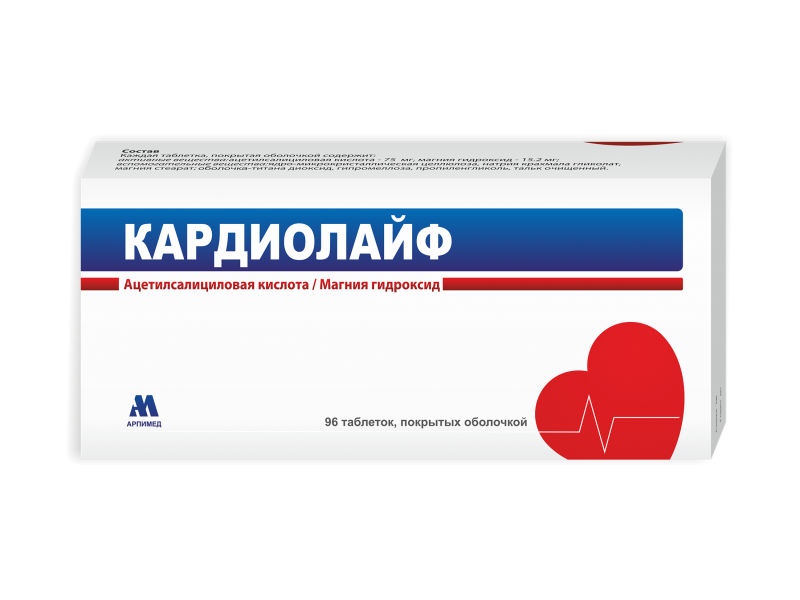 NSAIDs, antiplatelet agents. The mechanism of action of aspirin is irreversible inhibition of the enzyme COX-1, resulting in blocked the synthesis of thromboxane A2 and inhibiting platelet aggregation. It is believed that acetylsalicylic acid also has other mechanisms of inhibition of platelet aggregation that expands the scope of its application in various vascular diseases. Aspirin also has anti-inflammatory, analgesic and antipyretic activity.
Magnesium hydroxide, which is part of Cardiolife, protect the gastrointestinal mucosa against acetylsalicylic acid.

Contraindications
Special warnings and precautions for use
Drug should be taken after doctor prescription.
Aspirin may provoke bronchospasm and induce asthma attacks or other hypersensitivity reactions. Risk factors include the presence of asthma in anamnesis, hay fever, nasal polyposis, chronic respiratory diseases and allergic reactions (e.g., skin reactions, pruritus, urticaria) to other drugs.
Aspirin can cause bleeding of varying severity during and after surgery.

A few days before the planned surgery should be assess the risk of bleeding compared to the risk of ischemic complications in patients taking low doses of acetylsalicylic acid. If the risk of bleeding is significant, taking of aspirin should be temporarily discontinued.
The combination of aspirin with anticoagulants, thrombolytic and antiplatelet agents associated with an increased risk of bleeding.
Acetylsalicylic acid in low doses can trigger the development of gout in susceptible individuals (with decreased excretion of uric acid).
The combination of aspirin with methotrexate is accompanied by an increased incidence of side effects of the hemopoietic organs.

Admission of acetylsalicylic acid in high doses has a hypoglycemic effect, it is necessary to bear in mind when assigning it to patients with diabetes receiving hypoglycemic agents for oral intake and insulin.
At concomitant use of systemic corticosteroids and salicylates should be remembered that during treatment the concentration of salicylates in the blood is reduced, and after the abolition of systemic GCS possible overdose of salicylates.

With prolonged use of aspirin in low doses as an antiplatelet therapy, caution is necessary in elderly patients due to the risk of gastrointestinal bleeding.
At the same time taking acetylsalicylic acid and ethanol increased risk of damage to the gastrointestinal mucosa and prolonged bleeding.

Precautions for use
Precautions should be appoint a drug in gout, hyperuricemia, ulcers or gastrointestinal bleeding from the gastrointestinal tract in anamnesis, renal and / or liver failure, asthma, hay fever, nasal polyps, allergic conditions, in the II trimester of pregnancy.

With simultaneous application of acetylsalicylic acid increases the effect of these drugs:

Concomitant use of aspirin with ibuprofen reduces the cardioprotective effects of acetylsalicylic acid.
An additive effect is observed while taking aspirin and ethanol (alcohol).
Aspirin reduces the effect of uricosuric agents (benzbromarone) due to competitive tubular elimination of uric acid.
Leveraging the elimination of salicylates, systemic corticosteroids weaken their effect.
Antacids and cholestyramine while applying Cardiolife reduce absorption of the drug.

The use of salicylates in high doses in the I trimester of pregnancy is associated with increased frequency of malformations of the fetus. In the II trimester salicylates can be given only with the rigorous assessment of the risks and benefits. In the III trimester of pregnancy salicylates at high doses (> 300 mg / day) cause inhibition of labor, premature closure of the ductus arteriosus in the fetus, increased bleeding in the mother and fetus, and the appointment just before birth may cause intracranial hemorrhage, especially in preterm infants. Appointment of salicylates in III trimester of pregnancy is contraindicated.
The available clinical data is insufficient to establish the ability or inability to use during breastfeeding. Before the appointment of acetylsalicylic acid during breastfeeding should assess the potential benefits of therapy with respect to the potential risk to the infant.

During the period of treatment with acetylsalicylic acid, patients should be careful when driving and activities potentially hazardous activities that require high concentration and speed of psychomotor reactions.

4 blister packets with 24 tablets in each in the cardboard box.