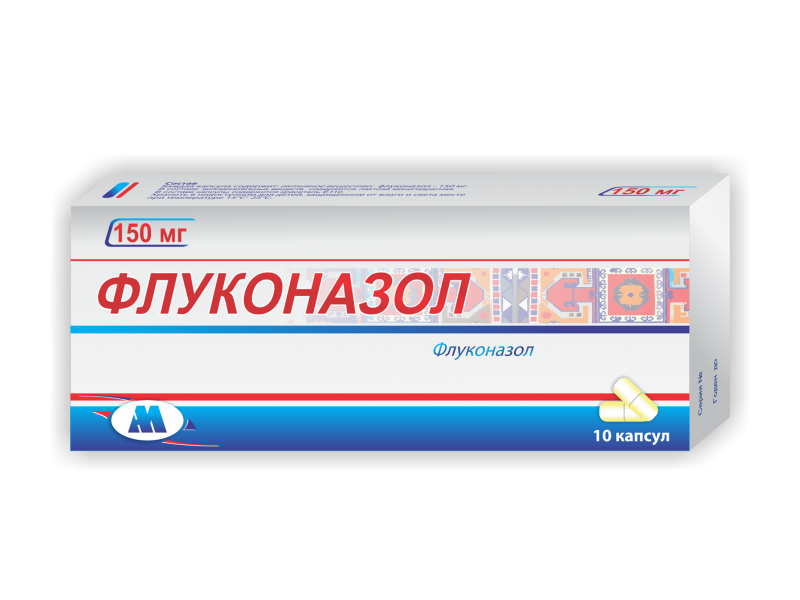 ATC subcategoryAzole antifungals (for systemic use)

Each capsule of Fluconazole 150 mg contains:

Fluconazole usually is fungistatic in action. Fluconazole and other triazole-derivative antifungal agents appear to have a mechanism of action similar to that of the imidazole-derivative antifungal agents. Like imidazoles, fluconazole presumably exerts its antifungal activity by altering cellular membranes resulting in increased membrane permeability, leakage of essential elements, and impaired uptake of precursor molecules. Although the exact mechanism of action of fluconazole and other triazoles has not been fully determined, the drugs inhibit cytochrome P-450 14-α-desmethylase in susceptible fungi, which leads to accumulation of C-14 methylated sterols (e.g., lanosterol) and decreased concentrations of ergosterol. It appears that this may occur because a nitrogen atom (N-4) in the triazole molecule binds to the heme iron of cytochrome P-450 14-α-desmethylase in susceptible fungi. Unlike some imidazoles that suppress ATP concentrations in intact cells and spheroplasts of C. albicans, fluconazole does not appear to have an appreciable effect on ATP concentrations in the organism. It is unclear whether this effect is related to the in vivo antifungal effects of the drugs. Fluconazole generally is fungistatic against Candida albicans when the organism is in either the stationary or early logarithmic phase of growth.

Resistance has developed in some Candida spp. following long-term prophylaxis with fluconazole, and cross-resistance with other azoles has been reported.

Microbiological interactions. A synergistic antifungal effect was seen in vitro with terbinafine and fluconazole against strains of Candida albicans.

Fluconazole is widely distributed and the apparent volume of distribution is close to that of total body water. Concentrations in breast milk, joint fluid, saliva, sputum, vaginal fluids, and peritoneal fluid are similar to those achieved in plasma. Concentrations in the CSF range from 50 to 90% of plasma concentrations, even in the absence of meningeal inflammation. Protein binding is only about 12%. About 80% of a dose is excreted unchanged in the urine and about 11% as metabolites. The elimination half-life of fluconazole is about 30 hours and is increased in patients with renal impairment. Fluconazole is removed by dialysis.

Uses and Administration
Fluconazole is a triazole antifungal used for treatment of vaginal candidiasis and candidal balanitis.
Fluconazole is given by mouth.

Use in renal impairment

Fluconazole should be used with caution in patients with impaired hepatic or renal function. Abnormalities in haematological, hepatic, and renal-function tests have been observed in patients with serious underlying diseases such as AIDS or malignancy. Cases of torsade de pointes and QT prolongation have been reported rarely and caution is advised when giving fluconazole to patients with proarrhythmic conditions.

Pregnancy: Fluconazole should be avoided during pregnancy.

Lactation: Fluconazole is distributed into breast milk, achieving concentrations similar to those found in maternal plasma, and its use in women who are breast feeding is not recommended.

Adverse effects
Adverse effects reported with fluconazole most commonly affect the gastrointestinal tract and include abdominal pain, diarrhoea, flatulence, nausea and vomiting, and taste disturbance. Other adverse effects include headache, dizziness, leucopenia, thrombocytopenia, hyperlipidaemias, and raised liver enzyme values. Serious hepatotoxicity has been reported in patients with severe underlying disease such as AIDS or malignancy. Anaphylaxis and angioedema have been reported rarely.

Skin reactions are rare but exfoliative cutaneous reactions such as toxic epidermal necrolysis and Stevens-Johnson syndrome have occurred, more commonly in patients with AIDS.

Contraindications
Fluconazole is contraindicated in patients with known hypersensitivity to the drug or any ingredient in the respective formulation.

Fluconazole is contraindicated in patients with acute porphyria.

The use of fluconazole with astemizole, cisapride, or terfenadine should therefore be avoided because of the risk of cardiac arrhythmias.

Fluconazole may interfere with the metabolism of some drugs if given concomitantly, mainly through inhibition of the cytochrome P450 isoenzymes CYP3A4 and CYP2C9. This may account for the reported increases in plasma concentrations of bosentan, ciclosporin, midazolam, nortriptyline, phenytoin, rifabutin, sulfonylurea hypoglycaemics and nateglinide, selective cyclo-oxygenase-2-inhibitors such as celecoxib and parecoxib, tacrolimus, triazolam, warfarin, and zidovudine; fluconazole may inhibit the formation of a toxic metabolite of sulfamethoxazole.

Fluconazole may also reduce the clearance of theophylline. The concentration of contraceptive steroids has been reported to be both increased and decreased in patients receiving fluconazole and the efficacy of oral contraceptives may be affected.

Appearance of capsule: the capsules have a white body and a white cap.
Appearance of granules: white or off white with tints of pink granules.

1 blister packet with 10 capsules in the cardboard box.