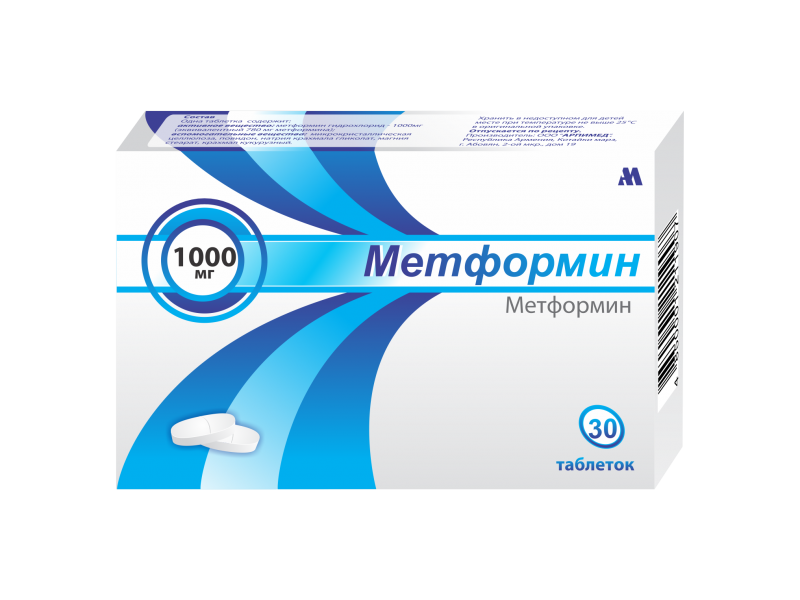 Metformin is a biguanide with antihyperglycaemic effects, lowering both basal and Postprandial plasma glucose. It does not stimulate insulin secretion and therefore does not produce hypoglycaemia. Metformin may act via 3 mechanisms:
(1) reduction of hepatic glucose production by inhibiting gluconeogenesis and glycogenolysis
(2) in muscle, by increasing insulin sensitivity, improving peripheral glucose uptake and utilisation
(3) and delay of intestinal glucose absorption.

Metformin increases the transport capacity of all types of membrane glucose transporters (GLUT). In humans, independently of its action on glycaemia, immediate-release metformin has favourable effects on lipid metabolism. This has been shown at therapeutic doses in controlled, medium-term or long-term clinical studies: immediate-release metformin reduces total cholesterol, LDL cholesterol and triglyceride levels. A similar action has not been demonstrated with the prolonged-release formulation, possibly due to the evening administration, and an increase in triglycerides may occur.

For metformin used as second-line therapy, in combination with a sulphonylurea, benefit regarding clinical outcome has not been shown.

In type 1 diabetes, the combination of metformin and insulin has been used in selected patients, but the clinical benefit of this combination has not been formally established.

Uses
Treatment of type 2 diabetes mellitus, particularly in overweight patients, when dietary management and exercise alone does not result in adequate glycaemic control.

A reduction of diabetic complications has been shown in overweight type 2 diabetic adult patients treated with metformin as first-line therapy after diet failure.

Monotherapy and combination with other oral antidiabetic agents:

Metformin and insulin may be used in combination therapy to achieve better blood glucose control. The usual starting dose of Metformin is 500 mg once daily, while insulin dosage is adjusted on the basis of blood glucose measurements.

Children: In the absence of available data, Metformin should not be used in children.

Method of administration
The tablets should be swallowed whole with a drink of water. They should not be chewed or crushed.

Very rare: Decrease of vitamin B12 absorption with decrease of serum levels during long-term use of metformin. Consideration of such an aetiology is recommended if a patient presents with megaloblastic anaemia.
Lactic acidosis

Very common: Gastrointestinal disorders such as nausea, vomiting, diarrhoea, abdominal pain and loss of appetite. These undesirable effects occur most frequently during initiation of therapy and resolve spontaneously in most cases. A slow increase of the dose may also improve gastrointestinal tolerability.

Hypoglycaemia has not been seen with metformin doses of up to 85 g, although lactic acidosis has occurred in such circumstances. High overdose or concomitant risks of metformin may lead to lactic acidosis. Lactic acidosis is a medical emergency and must be treated in hospital. The most effective method to remove lactate and metformin is haemodialysis.

Contraindication
Hypersensitivity to metformin hydrochloride or to any of the excipients.
Precautions

Lactic acidosis is a rare, but serious (high mortality in the absence of prompt treatment), metabolic complication that can occur due to metformin accumulation. Reported cases of lactic acidosis in patients on metformin have occurred primarily in diabetic patients with significant renal failure. The incidence of lactic acidosis can and should be reduced by assessing also other associated risk factors such as poorly controlled diabetes, ketosis, prolonged fasting, excessive alcohol intake, hepatic insufficiency and any condition associated with hypoxia.

Lactic acidosis is characterised by acidotic dyspnea, abdominal pain and hypothermia followed by coma. Diagnostic laboratory findings are decreased blood pH, plasma lactate levels above 5 mmol/l, and an increased anion gap and lactate/pyruvate ratio. If metabolic acidosis is suspected, metformin should be discontinued and the patient should be hospitalised immediately.

As metformin is excreted by the kidney, creatinine clearance and/or serum creatinine levels should be determined before initiating treatment and regularly thereafter:

Decreased renal function in elderly subjects is frequent and asymptomatic. Special caution should be exercised in situations where renal function may become impaired, for example when initiating antihypertensive therapy or diuretic therapy and when starting therapy with an NSAID.

As the intravascular administration of iodinated contrast materials in radiologic studies can lead to renal failure, metformin should be discontinued prior to, or at the time of the test and not reinstituted until 48 hours afterwards, and only after renal function has been re-evaluated and found to be normal.

Metformin hydrochloride should be discontinued 48 hours before elective surgery under general, spinal or peridural anaesthesia. Therapy should be restarted no earlier than 48 hours following surgery or resumption of oral nutrition and only if renal function has been established.

Each tablet contains up to 10.8mg sodium (0.5mmol) which should be taken into consideration for patients on a controlled sodium diet

To date, no relevant epidemiological data are available. Animal studies do not indicate harmful effects with respect to pregnancy, embryonal or fetal development, parturition or postnatal development.

When the patient plans to become pregnant and during pregnancy, diabetes should not be treated with metformin but insulin should be used to maintain blood glucose levels as close to normal as possible in order to lower the risk of fetal malformations associated with abnormal blood glucose levels.

Metformin is excreted into milk in lactating rats. Similar data are not available in humans and a decision should be made whether to discontinue nursing or to discontinue metformin, taking into account the importance of the compound to the mother.

Concomitant use not recommended

Avoid simultaneous administration with danazol, as it possesses hyperglycemic action. If treatment by danazol is needed, it is necessary to adjust the dosage of metformin drug during therapy by danazole and upon its discontinuation.

Increased risk of lactic acidosis in acute alcohol intoxication, particularly in case of:

Chlorpromazine: high-doses of chlorpromazine (100 mg daily) raise glycemia,reducing the release of insulin. If necessary, adjust the dosage of the Metformin during therapy with the other drug and upon its discontinuation.

Diuretics: concomitant use of loop diuretics could increase the risk of lactic acidosis in those with impaired renal function. Metformin should not be prescribed if creatinine clearance below 60 ml /min.

Intravascular administration of iodinated contrast agents may lead to renal failure, resulting in metformin accumulation and a risk of lactic acidosis.

Metformin should be discontinued prior to, or at the time of the test and not reinstituted until 48 hours afterwards, and only after renal function has been re-evaluated and found to be normal.

Associations requiring precautions for use

Glucocorticoids (systemic and local routes), beta-2-agonists, and diuretics have intrinsic hyperglycaemic activity. Inform the patient and perform more frequent blood glucose monitoring, especially at the beginning of treatment. If necessary, adjust the dosage of the antidiabetic drug during therapy with the other drug and upon its discontinuation.

ACE-inhibitors may decrease the blood glucose levels. If necessary, adjust the dosage of the antidiabetic drug during therapy with the other drug and upon its discontinuation.

Sulfonylureas, insulin, acarbose, salicylates may increase the risk of hypoglycemia.

10 Tablets are packed into PVC-Aluminum blister packet (inside package).
3 Blister inserted together with the leaflet into cardboard boxes (outer package).